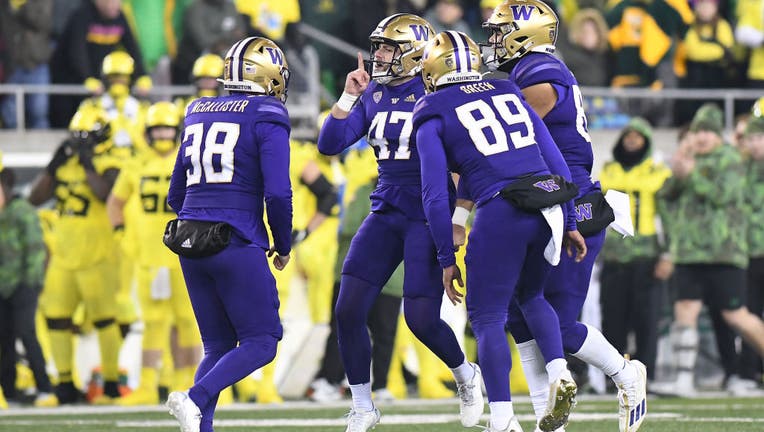 The senior made a 43-yard field goal with 51 seconds left and No. 24 Washington snapped No. 6 Oregon’s eight-game winning streak with a 37-34 victory Saturday, dealing a blow to the Ducks’ chances for a spot in the College Football Playoff.

In 2018, Henry had a chance to beat the Ducks but his 37-yard field-goal attempt on the final play in regulation was wide right and Oregon went on to win 30-27 in overtime.

"That (miss) is always in the back of the mind, especially because when people think of me they think of that kick. So hopefully they remember me for this kick," he said.

Michael Penix Jr. threw a 62-yard scoring pass to Taj Davis to tie it at 34 with 3:07 to go after Oregon quarterback Bo Nix limped off the field on the previous series.

"I didn’t know he missed it here four years ago and somebody was telling me `This is a redemption field goal. He’s going to make it," Penix said. "And I was like, OK, as long as he makes it, I’m good."

Penix, the national leader for passing yards per game, threw for 408 yards and two touchdowns as Washington stopped a 13-game losing streak against ranked Oregon teams. The last win was in 2002 when the Huskies beat No. 23 Oregon 42-12. Washington was 0-7 against the Ducks when they’re ranked in the top 10.

Nix fell after a 2-yard run on third-and-5 on the Washington 10 and he limped off the field. Camden Lewis’ 26-yard field goal finished the drive to make it 34-27 with 3:54 left. After Washington’s game-tying touchdown Nix was replaced for a series by backup Ty Thompson.

Nix threw for 280 yards and two scores, and ran for 59 yards and another touchdown. The loss snapped a 23-game home winning streak, the third-longest streak in the nation and a win shy of the school record.

Oregon coach Dan Lanning said after the game he was waiting for a further evaluation on Nix’s injury, but trainers had determined he was able to return to the game for the final series.

"Well, certainly not the result we had hoped for. I think our guys played the entire game. They certainly didn’t quit didn’t throw in the towel," Lanning said. "You have to give Washington credit, they played a complete game and we made more mistakes at the end of the game that hurt us."

The Huskies scored on their opening series when Penix handed off to Wayne Taulapapa, who dashed 13 yards down the middle for the TD.

The Ducks settled for a 43-yard field goal from Lewis on their first drive. Henry kicked a 30-yarder to make it 10-3 early in the second quarter.

Oregon got to the 1 on the ensuing drive but the snap was fumbled and Washington recovered. The Huskies did not move the ball and instead the Ducks had good field position ahead of Nix’s 10-yard TD dash, his 14th of the season, to pull Oregon within 13-10.

After Nix hit Dont’e Thornton with a 46-yard touchdown pass on Oregon’s first drive of the second half for a 17-13 lead, Cameron Davis scored on a 3-yard run to put the Huskies back on top.

Noah Whittington’s 29-yard scoring run gave Oregon a 24-20 lead midway through the third. It was a back-and-forth duel the rest of the way.

Jeffrey Bassa’s interception of Penix at the goal line to start the fourth quarter appeared to shift the momentum to the Ducks until Nix’s untimely injury.

"It’s a feeling you can’t describe," said Jalen McMillan said, who finished with 122 yards receiving for the Huskies. "It’s like all our hard work, we’ve been through so much as a team and as a brotherhood. So, this dub means everything to us. We’ve been working for this forever."

Washington: Washington hasn’t visited Eugene since 2018, when Oregon won 30-27 in overtime. The Huskies got a boost from the full return of linebacker Edefuan Ulofoshio, who missed the first eight games of the season recovering from a knee injury. He saw a few snaps last weekend in the victory over Oregon State.

Oregon: Oregon missed out on going 7-0 in Pac-12 play for the first time since 2019. ... In addition to snapping the overall winning streak in Eugene, the loss also snapped a school record 17 straight conference games at home.

Oregon: The Ducks host No. 13 Utah next Saturday.