Seattle Kraken General Manager Ron Francis spoke with FOX 13's Seattle Sports Live about the current team and head coach, the overall plan, the upcoming trade deadline, and the future. Aaron Levine has the interview as the franchise's inaugural season skates on.

SEATTLE - The NHL on Wednesday announced an updated Seattle Kraken schedule for seven games that had been postponed, plus other changes.

Seven previously postponed games were given new dates in February. Two other games were moved due to existing team schedules and logistics.

Instead of three games and a three-week Winter Olympics break, the Kraken will now play 10 games in February.

The team said all original tickets for postponed home games at Climate Pledge Arena will be valid. You can find updates on ticketing questions here.

The Seattle Kraken has a new teammate and he made his debut during Monday’s game against the Chicago Blackhawks. Davy Jones is the Kraken’s first-ever team dog and he is a 4-month-old husky mix.

Here's the new schedule for February 2022: 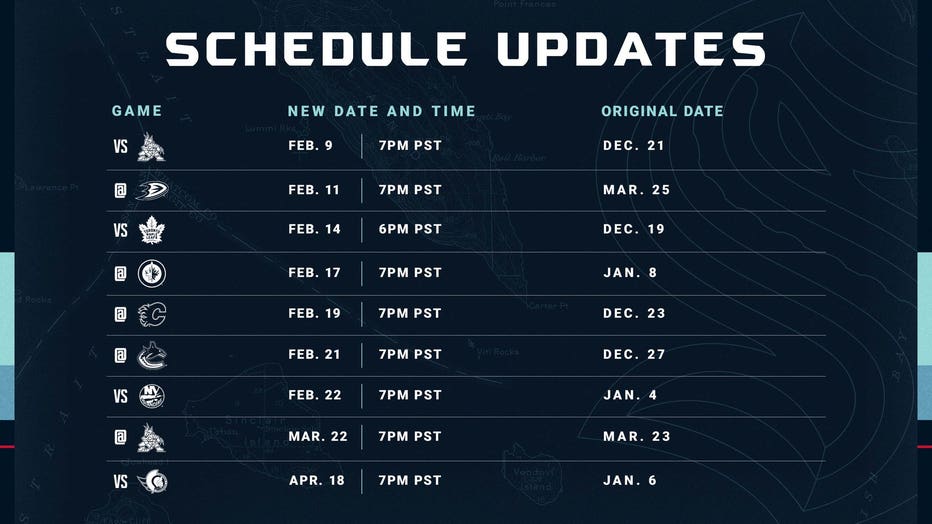 Seattle Kraken updated schedule released on Jan. 19, 2022 for games postponed due to COVID-19.

The National Hockey League rescheduled 98 games between Nov. 18 and Jan. 18 and changed 22 additional games "to accommodate the new dates for postponed games."

"We are profoundly grateful to our fans for their support and understanding during a challenging time and to our clubs, the NHL Players' Association and the players for their cooperation in a rescheduling of unprecedented logistical complexity," said Bill Daly, NHL deputy commissioner.