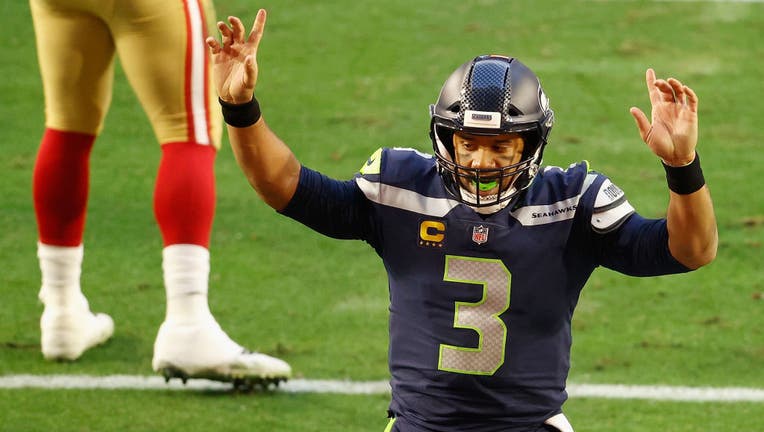 GLENDALE, ARIZONA - JANUARY 03: Quarterback Russell Wilson #3 of the Seattle Seahawks celebrates after throwing a 6-yard touchdown reception to Tyler Lockett (not pictured) during the second half of the NFL game against the San Francisco 49ers at Sta

Seattle Seahawks quarterback Russell Wilson won the Walter Payton Man of the Year award for his work in the community.

Wilson invoked the words of Walter Payton in his acceptance speech.

"We are stronger together than we are alone..." Wilson said. "To the young boy or girl who has a dream ... who wants to make a difference ... remember: Love always protects, always trusts, always hopes, always perseveres.

By winning the Walter Payton Man of the Year Award, Wilson gets a $250,000 donation to Russell and Ciara's Why Not You Foundation.

The award is one of the most prestigious honors given to an NFL player.

Wilson is the second Seahawk to earn the award. Steve Largent also won the award back in 1988.

A pair of Aarons pulled off an NFL hat trick Saturday night.

Also taking home awards were two members of the Washington Football Team: quarterback Alex Smith was the Comeback Player of the Year in one of the most inspirational stories of 2020, and edge rusher Chase Young got the top defensive rookie.

Rodgers had perhaps the best season of his 16-year career, leading Green Bay to a 13-3 regular season, the NFC’s best mark. Just a few months after questions arose about his comfort level with the Packers — and their choosing a quarterback in the first round of April’s draft — Rodgers, who turned 37 in December, tore up the NFL.

Rodgers topped the league with 48 touchdown passes completion rate (70.7 percent), and a 121.5 rating. He was picked off just five times.

"You just named two great defensive players," he said, "so any time your name is mentioned with greats, you will be honored — especially there’s only a few that have accomplished that. To be the third to do it that is truly a blessing. It shows the body of work that I have; anytime your hard work is rewarded you are going to be happy about that. It is just a blessing."

The 36-year-old Smith completed a remarkable comeback from a broken right leg that required 17 surgeries to repair. Smith stepped in to start eight games before a strained right calf in the same leg sidelined him for the postseason spot he helped the team secure.

Everyone across the league cited Smith as an inspiration.

"It is humbling when I hear that," Smith said. "I know for how long I spent thinking about and looking at the men and women who inspired me. I am stuck in the hospital bed, stuck in a wheelchair, spent countless hours googling and looking at videos of our service men and women going through the same rehab as I went through. ...

"So there were definitely people in front of me that I am so thankful for that allowed me to go down this path. And obviously I am humbled and I guess you hope that you can kind of be a link in that chain for anybody coming behind you."

"Two thousand yards is always on a running back’s mind, especially in the league because it is so unique," Henry said. "Always put the team goals first, then individual goals come second. But I knew we take a lot of pride in the running game and have had success, and then anything is possible with the group I am with, (so) we could accomplish it."

Stefanski’s Browns snapped their postseason drought dating back to the 2003 season by going 11-5 in the rugged AFC North, then beating Pittsburgh in the wild-card round before a close loss at Kansas City.

"We never concerned ourselves with the past, we are all about moving forward," Stefanski said. "This season had its unique challenges and we focused on those each and every day and ultimately tried to put together a group of guys that would fight every single week, and I think we did that. But we were so focused on what we were doing in the here and now."

Daboll helped Buffalo to a 15-4 record and a spot in the AFC championship game as he oversaw the rapid development of quarterback Josh Allen in his third pro season. Only Green Bay with 509 scored more than Buffalo’s 501 points.

Herbert, chosen sixth overall in last April’s draft, is the second straight quarterback and the ninth since 2004 to be the top offensive rookie. Not even a starter when the season began, Herbert stepped in during the Chargers’ second game when Tyrod Taylor was injured during a medical procedure. Herbert never looked back, and set a rookie record with 31 TD passes.

"I think it is a testament to all the hard work we have put in as a team, the coaching staff and the players," Herbert said. "It’s been a tough year, but we put in a lot of good work, but just to be in the conversation (for the award) is an honor."

Young was drafted four spots ahead of Herbert. The edge rusher led all rookies with 7 1/2 sacks and should be an anchor of the team’s defense throughout the decade.

"I came in eager to just work hard and be a sponge," Young said, "and I watched coach (Jack) Del Rio and (head coach Ron) Rivera just from afar, and always just tried to pick their minds about football in general. And I feel like that helped me throughout the year."