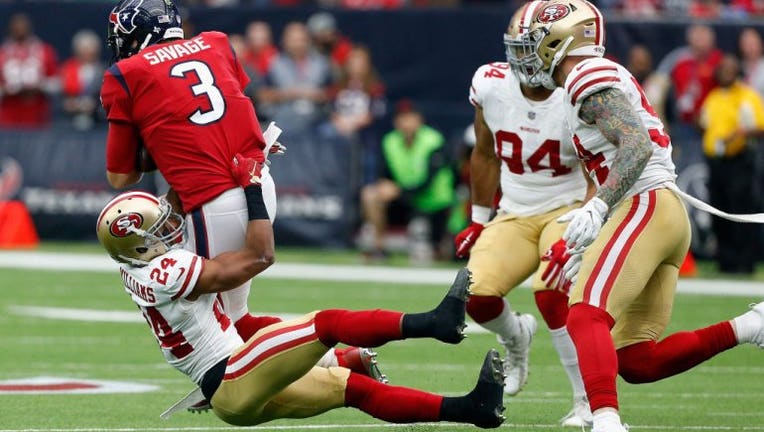 Tom Savage #3 of the Houston Texans is sacked by K'Waun Williams #24 of the San Francisco 49ers in the first quarter at NRG Stadium on December 10, 2017 in Houston, Texas. (Photo by Bob Levey/Getty Images)

HOUSTON -- The NFL and the players' union announced a series of changes Friday to the way potential concussions are handled during games following an ugly incident in which Texans quarterback Tom Savage was allowed to return to the field after a hit left him on the ground, arms shaking.

Among the changes is the addition of an expert watching games from a central location with the authority to alert sideline medical teams to look into an incident. And if a player shows signs of a seizure or similar responses, as Savage did, they will be removed from the game and cannot return.

The NFL has been under increased scrutiny the past several years over player safety when it comes to head injuries. A $1 billion settlement of concussion-related claims from more than 20,000 former players took effect earlier this year, resolving thousands of lawsuits that accused the NFL of hiding what it knew about the risks of repeated concussions.

The jarring injury to Savage prompted a joint review of concussion protocol by the NFL and the NFL Players Association. He was hurt in the second quarter of Houston's 26-16 loss to San Francisco on Dec. 10 when he was driven to the ground on a hit by Elvis Dumervil. Replays showed Savage looking dazed after his head hit the ground with both of his arms shaking and lifted upward. He was taken to the medical tent where he stayed for less than three minutes before returning to the bench and going back in for the next series.

Savage threw two incompletions on that drive, and Houston's team doctor approached him after he returned to the sideline at the end of that possession. He was evaluated again and taken to the locker room after it was determined that he did have a concussion.

The NFL said the Texans would not be fined for the incident. The review determined that the medical staff followed protocol but his return to the game was "unacceptable." Medical staff didn't see slow-motion video where Savage's "fencing posture," indicative of a concussion, until after they did their initial evaluation, the review found. Texans medical staff later identified symptoms that weren't present during the first evaluation.

O'Brien said he was glad to see that improvements to the protocol were made in the wake of Savage's injury.

"I think there's a lot of things that can be improved," he said. "I think anything where you can help — obviously the safety of the player in this game is the most important thing (and) I think anything like that helps when you try to improve that process."

The Seattle Seahawks were fined $100,000 earlier this month for not properly following protocol with quarterback Russell Wilson during a game in November. Seattle was the first team to be fined for a violation of the protocol. In addition to the fine, Seattle's medical staff and coaches were required to attend training on the protocol.

Among the changes detailed by the NFL and NFLPA (all of them already implemented):

— Using a centralized, unaffiliated neurotrauma consultant at the league office to monitor feeds of all games and contact the team medical staff on the sidelines if they see anything that deserves further evaluation.

— If players show signs of a seizure or fencing responses, like Savage did, they will be removed from the game and cannot return.

— Players who stumble or fall when trying to stand will require a concussion evaluation in the locker room.

— Officials, teammates and coaches have been told to take injured players straight to the medical staff for evaluation if a concussion evaluation is warranted.

— All players who are evaluated for concussions on game day must have a follow-up evaluation the next day by a member of the medical staff.

— A third, unaffiliated neurotrauma consultant will be added to all playoff games including the Super Bowl to step in if one of the other two are away from the sideline tending to an injured player.