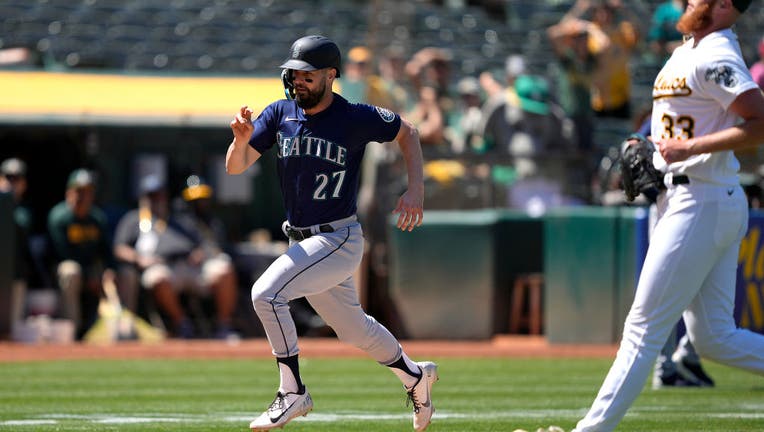 OAKLAND, CALIFORNIA - JUNE 23: Jesse Winker #27 of the Seattle Mariners scores on a wild pitch from A.J. Puk #33 of the Oakland Athletics in the top of the ninth inning at RingCentral Coliseum on June 23, 2022 in Oakland, California. (Photo by Thearo

OAKLAND, Calif. - Oakland starter Frankie Montas took a no-hit bid into the eighth inning, then reliever A.J. Puk threw a pair of run-scoring wild pitches with two outs in the ninth that gave the Seattle Mariners a 2-1 win over the Athletics on Thursday.

The Mariners loaded the bases with three walks and rallied on Puk’s wayward tosses to complete a three-game sweep. Seattle won with two hits, both in the eighth.

"It’s not the best win, not the cleanest win. But it’s a win," Mariners first baseman Ty France said.

Before the wild ninth, it seemed the 29-year-old Montas would be the story of the day.

Montas didn’t allow a hit until Adam Frazier lined a clean single to left field with two outs in the eighth. Montas gave up another hit and was pulled after the inning.

Montas struck out eight in a season-high eight innings, and exited with a 1-0 lead — he has received either one or zero runs of support in 11 of his 15 starts. He is expected to be among the starting pitchers available as the Aug. 2 trade deadline approaches.

With regular closer Dany Jimenez out with a shoulder injury, Zach Jackson (1-2) entered for the ninth and walked two before Puk entered with two outs and two on.

Paul Sewald retired the A’s in order in the bottom of the ninth for his fifth save. The Mariners have won 11 of their past 12 at the Oakland Coliseum.

Montas hit 98 mph with his fastball and said he had a good feel for his cutter too. He did not second-guess Kotsay’s decision to pull him after the eighth at 102 pitches.

Seattle ace Robbie Ray limited the A’s to four hits and struck out six over six innings. Oakland scored in the first when Christian Bethancourt hit an RBI single to snap a 0-for-12 slump.

Reliever Diego Castillo (4-1) got the win.

France, enjoying an All-Star caliber first half of the season, left the game in the bottom of the fifth with an injured left elbow when he collided with Oakland’s Sheldon Neuse while taking a throw at the bag.

France’s left hand bent back and his glove came off as he made contact with Neuse, causing France to fall to the ground in pain.

After the game, he said X-rays on his elbow came out clean and that he’s hoping to avoid the injured list.

"We did all the tests, the strength was there," France said. "We’ll see how it feels in the morning."

Mariners: Seattle announced that C Tom Murphy (dislocated left shoulder) will have surgery and miss the rest of the season. He’s been sidelined since getting injured May 7 on a play at the plate. "He tried to do everything he could to get back," manager Scott Servais said. "He did a PRP injection, he did a number of different treatments to try to get it back and going. It just wasn’t taking."

Athletics: OF Stephen Piscotty (strained left calf) will play a third rehab game Friday for Triple-A Las Vegas. Kotsay said reports have been good but did not give a timetable for Piscotty’s return to the active roster.