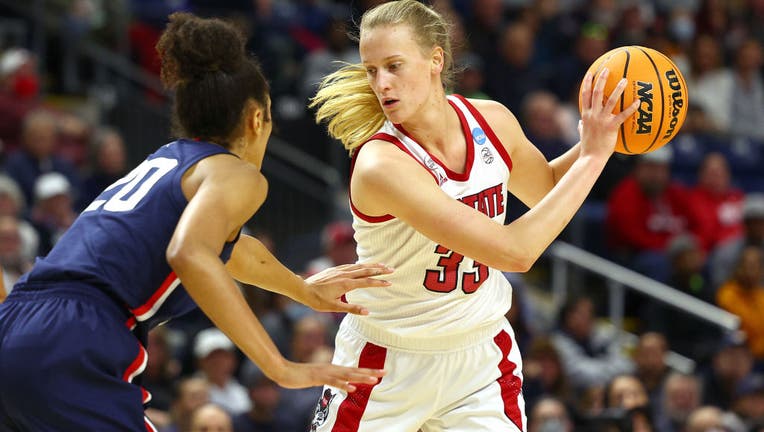 BRIDGEPORT, CONNECTICUT - MARCH 28: Elissa Cunane #33 of the NC State Wolfpack tries to get past Olivia Nelson-Ododa #20 of the UConn Huskies during the NCAA Elite Eight game at Total Mortgage Arena on March 28, 2022 in Bridgeport, Connecticut. (Phot

North Carolina State center Elissa Cunane was the first of three selections made by the Seattle Storm in Monday's WNBA Draft.

Cunane averaged 13.6 points and 6.3 rebounds during her last season with the Wolfpack. The numbers represented a slight dip from her two previous seasons where she averaged 16.3 and 16.4 points per game, respectively, and 8.3 and 9.6 rebounds per game.

Cunane was an AP and USBWA second-team All-American and a consensus first-team All-ACC performer for her senior season.

The Storm had consecutive picks in the second round of the draft. After selecting Cunane with the 17th overall pick, they drafted Georgia Tech forward Lorela Cubaj with the 18th overall pick. However, Cubaj was then traded to the New York Liberty in exchange for a 2023 second-round pick.

Seattle then followed up the Cunane selection by taking University of Connecticut guard Evina Westbrook with the 21st overall pick and wrapped up their class with UC Caps (Australia) guard Jade Melbourne with their lone third round pick.

Westbrook averaged 8.4 points per game with 4.3 assists per game this season for the Huskies.

Melbourne represented Australia at the 2021 FIBA Women's Asia Cup as they earned a bronze medal. She also played for Australia's FIBA U19 Women's Basketball World Cup where she averaged 12.6 points per game. Australia lost to the United States 70-52 in the championship game.