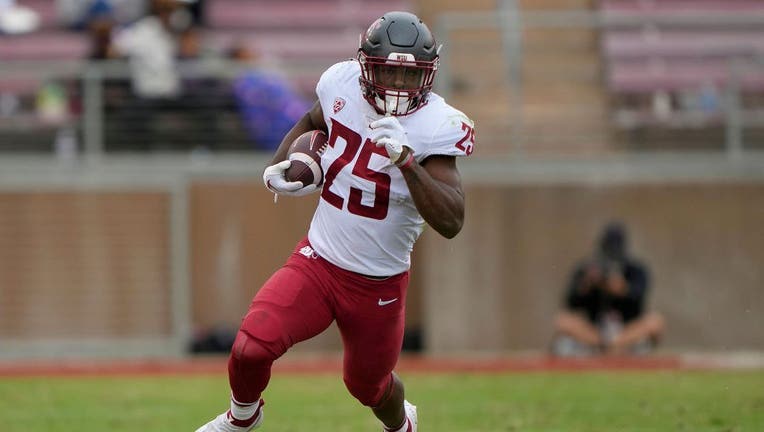 STANFORD, CALIFORNIA - NOVEMBER 05: Nakia Watson #25 of the Washington State Cougars carries the ball against the Stanford Cardinal during the second quarter of an NCAA football game at Stanford Stadium on November 05, 2022 in Stanford, California. (

PULLMAN, Wash. - Nakia Watson ran for 116 yards and three touchdowns as Washington State beat Arizona State 28-18 on Saturday to qualify for a bowl game for the seventh time in the past eight seasons.

Cameron Ward completed 22 of 37 passes for 219 yards for Washington State (6-4, 3-4 Pac-12), whose defense came in leading the conference in fewest points allowed per game at 20 and managed to stifle the Sun Devils until late in the contest.

Watson rushed for a career-high 166 yards last weekend in WSU’s 52-14 win at Stanford.

"They really want to prove the type of team they are," Dickert said of the Cougars. "This group will be defined by how we finish."

Emory Jones relieved Trenton Bourguet at quarterback in the first half and completed 15 of 23 passes for 186 yards and two touchdowns for Arizona State (3-7, 2-5), which was playing in chilly and foggy Pullman for the first time since 2015.

Xazavian Valladay rushed for 134 yards and a touchdown for the Sun Devils.

Arizona State coach Shaun Aguano said his team did not execute well in the first half. "We left our defense on the field too much on those early possessions," Aguano said.

Washington State scored first, on a 2-yard run up the middle by Watson, midway through the first quarter.

Washington State’s Leyton Smithson caught a 2-yard touchdown pass from Ward on their next series, but the conversion kick was blocked and the Cougars led 13-0. Watson had a 20-yard run and a 35-yard pass reception on the drive.

Washington State drove to the ASU 2 on its next possession, but Ward’s pass on fourth down was broken up by Ed Woods and the Cougars turned the ball over on downs.

Arizona State punted on its first four drives and its fifth ended when Bourguet was intercepted by Chau Smith-Wade, who returned the ball to the 4-yard line. Watson bulled over for a touchdown and Smithson caught the conversion pass to give Washington State a 21-0 lead.

Jones replaced Bourguet on the next drive, but the Sun Devils punted again.

Watson scored his third touchdown of the first half on a 2-yard run on Washington State’s next drive, and the Cougars led 28-0 at halftime.

"They could’ve quit after that first half, but they fought all the way through. It’s just that playing from behind was too much. ... We can’t let ourselves get down that far," Aguano said.

The Cougars did not score in the second half.

Arizona State got on the scoreboard when Jalin Conyers caught a short pass from Jones and ran for a 47-yard touchdown in the closing seconds of the third quarter. The conversion pass failed and Washington State led 28-6.

Valladay added a touchdown run late in the fourth. Jones threw a touchdown pass to Elijhah Badger with less than a minute left in the game, but the conversion pass failed.

"That’s not ideally how we wanted to win that game," Dickert said of Arizona State’s three late touchdowns. "We need to be more mature and handle leads," Dickert said. "At the end of the day we won it. We won it ugly."