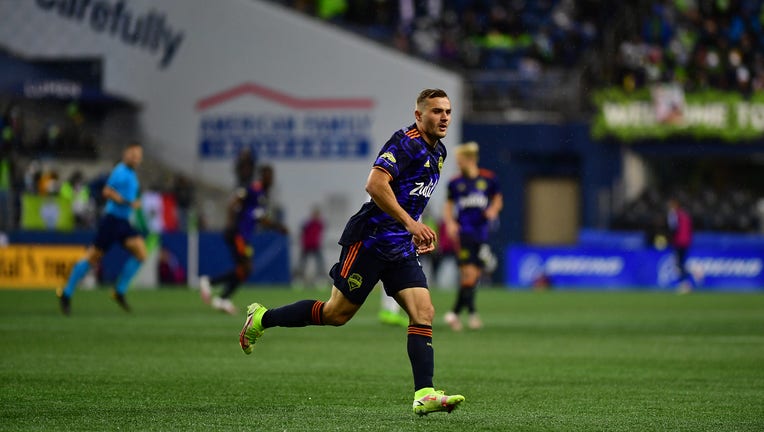 SEATTLE - Not that he forget the sound, but Jordan Morris took a moment to appreciate noise when he stepped back on the field in a Seattle Sounders uniform.

"It’s been almost two years since I played in front of fans, so that was a special moment," Morris said.

Morris made his return to the field eight months after suffering a major knee injury as the Seattle Sounders and Los Angeles Galaxy played to a 1-1 draw on Monday night.

Javier "Chicharito" Hernández scored in the 19th minute off a corner kick for the Galaxy, while Seattle’s Raúl Ruidíaz scored on a penalty kick early in the second half, after Cristian Roldan was fouled in the box.

Both teams earned a needed point in the fight for playoff positioning in the Western Conference. For the moment, Seattle (17-8-8, 59 points) went one-point clear of Sporting Kansas City and Colorado for first place in the West. Kansas City has two games remaining, while both Seattle and Colorado have one.

But Seattle is winless in its past five games heading into the regular-season finale.

"This is going to be a great experience for this group of players together to go home and try and get it done," Galaxy coach Greg Vanney said.

But the night was about Morris and his return well ahead of any initial expectations.

Morris suffered a torn ACL in his left knee last February while on loan with Swansea City in the English League Championship. It was the second major knee injury of Morris’ career and was expected to knock him out for the rest of 2021.

His recovery was well ahead of schedule and he returned to training with Seattle several weeks ago, and was given clearance by the team’s medical staff to be included against the Galaxy.

Morris came on in the 60th minute, replacing Ruidíaz. He was greeted by a huge ovation in his first appearance for the Sounders since the MLS Cup final loss to Columbus last December.

Morris never got a clean look at goal, although it wasn’t for a lack of effort by his teammates.

"Definitely some chills and goosebumps going onto the field, but my thought process was what can I do to help the team win," Morris said.

But this was the first step for Morris and should give a boost to Seattle entering the playoffs. It’s also the start of his journey getting back on the radar of coach Gregg Berhalter as the U.S. winds its way through World Cup qualifying. Morris won’t be a candidate for the matches later this month against Jamaica and Mexico, but he could be in the mix for a spot in January and beyond.

Chicharito scored for the fourth time in his past six matches to give Los Angeles the early advantage, while Ruidíaz scored his 17th of the year, tying the club record set by Obafemi Martins in 2014. It also pulled Ruidíaz within one of NYCFC’s Valentín Castellanos in the race for the Golden Boot. Ruidíaz is tied with Ola Kamara for second.

Seattle had several chances to find a winning goal, but Roldan hit the post twice and Xavier Arreaga’s header in second-half stoppage time that Los Angeles goalkeeper Jonathan Bond saved off the crossbar.

"In the balance of the game, I thought they dominated the second half and we had to be resolute and stand strong," Bond said.