MLB is investigating after Justin Turner was spotted celebrating with his teammates just minutes after he was pulled from Game 6 of the World Series for testing positive for COVID-19.

LOS ANGELES - MLB is investigating after the league's office claims Los Angeles Dodgers third baseman Justin Turner "disregarded" COVID-19 protocols by celebrating with his team after winning the World Series, despite being pulled from Game 6 after finding out he had tested positive for the virus.

"Following the Dodgers' victory, it is clear that Turner chose to disregard the agreed-upon joint protocols and instructions he was given regarding the safety and protection of others," MLB said in a statement released Wednesday afternoon. "While a desire to celebrate is understandable, Turner's decision to leave isolation and enter the field was wrong and put everyone he came into contact with at risk."

Turner was seen after the game hugging teammates, touching the World Series trophy and even taking his mask off when the team gathered for photos.

According to MLB, nasal swabs were conducted on the Dodgers' traveling party Tuesday night following their victory. Both the Dodgers and the Tampa Bay Rays were also tested again Wednesday.

"Their travel back to their home cities will be determined after being approved by the appropriate authorities," the statement continued.

The Los Angeles County Department of Public Health did not immediately respond to a request for comment on whether the agency was working with the team or might require the team to isolate or quarantine upon their return.

The Commissioner's Office is beginning a full investigation into the matter and will consult with the Players Association within the parameters of the joint 2020 Operations Manual, MLB said. 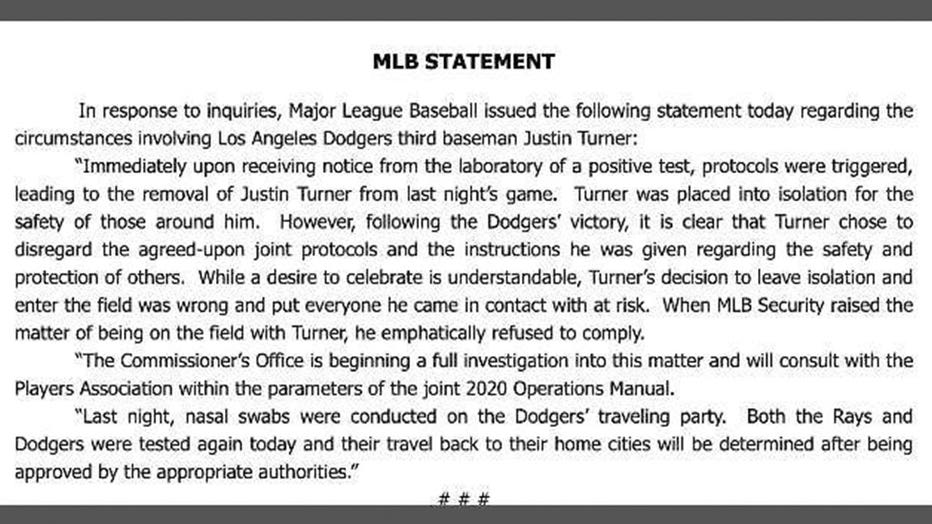 Turner was pulled from the game prior to the eighth inning, and according to a written statement from MLB, the Dodgers third baseman was told to isolate from others.

Despite his diagnosis, Turner joined the championship celebration on the field at Globe Life Field in Arlington, Texas, including holding the Commissioner's Trophy, kissing his wife Kourtney and sitting without a mask next to manager Dave Roberts, a cancer survivor, for a team picture. 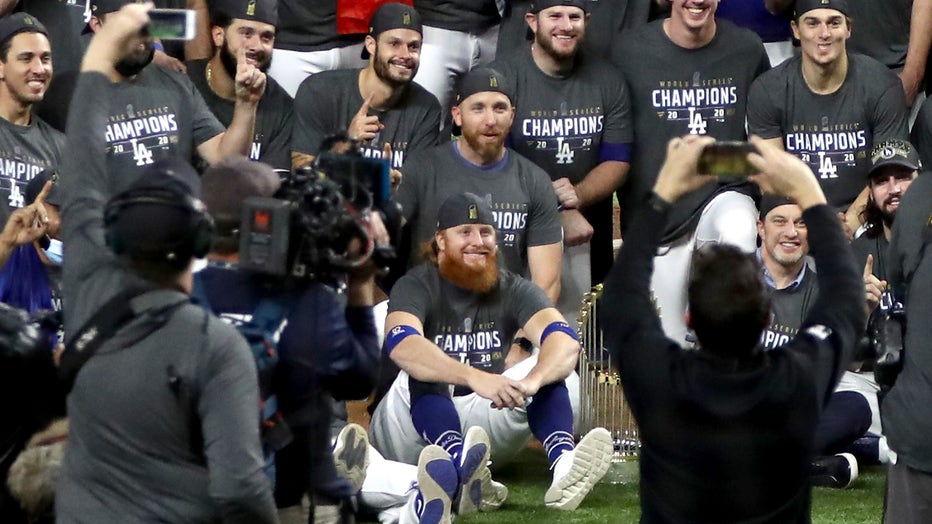 ARLINGTON, TEXAS - OCTOBER 27: Justin Turner #10 and the Los Angeles Dodgers pose for a photo after defeating the Tampa Bay Rays 3-1 in Game Six to win the 2020 MLB World Series at Globe Life Field on October 27, 2020 in Arlington, Texas. (Photo by R

The fact that Roberts survived cancer puts the Dodgers skipper in the high-risk category for COVID-19 complications. After the game, Roberts told FOX Sports he didn't touch Turner.

"Subsequent tests we're going to take are really important to figure out what we do and to make sure that any of us that are potentially positive don't spread it to other people," Dodgers' President of Baseball Operations Andrew Friedman said at a news conference following the game.

"Obviously from our standpoint, that contact tracing (figuring) out who's been around him and the tests are all going to be incredibly important from this point forward. Before we are to interact with other people I think it is important for us all to clear the requisite testing hurdles before we do that,'' he said.

Friedman said that after Turner was removed from the game, he was "quarantined in a doctor's office off to the side."

"From his standpoint, him having a chance to take a picture with the trophy was incredibly meaningful to him,'' Friedman said. "It's hard for me to say specifically about the on-field because I didn't see everything that happened or didn't."

Ken Rosenthal, a reporter on Fox's Major League Baseball telecasts, tweeted that the result from a coronavirus test Turner took Monday came back in the second inning.

Turner's test from Tuesday "was then expedited, and when it came back positive, he was removed from the game," Rosenthal tweeted.

Following the game, Turner took to social media that he does not feel any symptoms.

"Just experienced every emotion you can possibly imagine. Can’t believe I couldn’t be out there to celebrate with my guys!" he said on social media.

Epidemiologists say Turner's actions may have turned a glorious night into a superspreader event.

"As a sports role model, did a fantastic job," said Anne Rimoin, of UCLA epidemiology. "As a public health model, not so good."