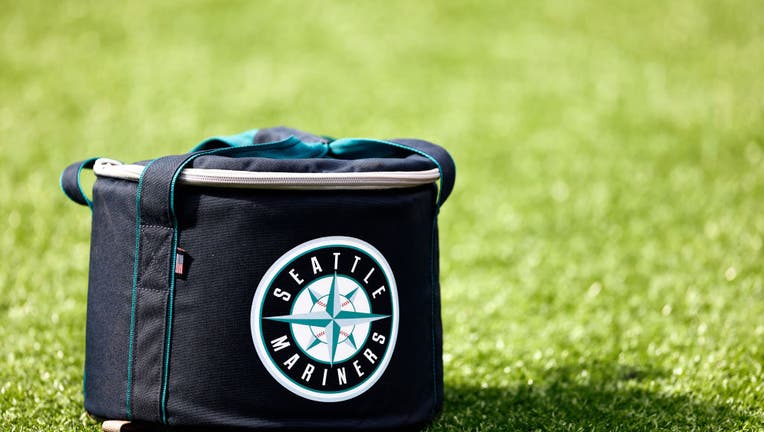 TORONTO, ON - MAY 16: A Seattle Mariners bag on the field during batting practice prior to a MLB game against the Toronto Blue Jays at Rogers Centre on May 16, 2022 in Toronto, Ontario, Canada. (Photo by Vaughn Ridley/Getty Images)

Major League Baseball is introducing some of its most radical rules next season, adopting a pitch clock and limiting defensive shifts after concluding modern analytics created a slower, less entertaining sport.

The decisions were made Friday by the sport’s 11-man competition committee over the unanimous opposition of the panel’s four players. Commissioner Rob Manfred pushed for the innovations along with a management team that included former Boston and Chicago Cubs executive Theo Epstein, now an MLB consultant.

"The influx of data in our industry," Epstein said, "have not improved the game from an esthetic standpoint or from an entertainment standpoint. So in my role now, it’s my responsibility to try to look at the big picture, think about what’s great for fans."

Players supported the third major initiative: larger bases that are expected to lessen injuries and lead to more stolen bases because of a decreased distance of 4 1/2 inches.

Manfred called the rules an attempt to "bring back the best form of baseball."

"Number one, fans want games with better pace," he said during a news conference. "Two, fans want more action, more balls in play. And three, fans want to see more of the athleticism of our great players."

Union head Tony Clark was noticeably absent, as he was at the announcement of an agreement in March that ended a 99-day lockout.

"Players live the game — day in and day out. On-field rules and regulations impact their preparation, performance, and ultimately, the integrity of the game itself," the union said in a statement. "Major League Baseball was unwilling to meaningfully address the areas of concern that players raised."

The pitch clock will be set at 15 seconds with no runners on base and 20 seconds with runners — up from the 14/19 tested at Triple-A this season and 14/18 at lower minor league levels.

There will be a limit of two of what MLB calls disengagements — pickoff attempts or steps off the rubber — per plate appearance, and a balk would be called for a third or more unless there is an out. The disengagement limit, which some players predict will beneft baserunners, would be reset if a runner advances.

A catcher is required to be in the catcher’s box with nine seconds left on the clock and a hitter in the batter’s box and focused on the pitcher with eight seconds remaining. Penalties for violations will be a ball called against a pitcher and a strike called against a batter.

A batter can ask an umpire for time once per plate appearance, and after that it would be granted only at the umpire’s discretion if the request is made while in the batter’s box.

"It reminded me of the game that I grew up watching in the ’70s and ’80," said former outfielder Raúl Ibañez, now an MLB senior vice president.

Two infielders will be required to be on either side of second and all infielders to be within the outer boundary of the infield when the pitcher is on the rubber. Infielders may not switch sides unless there is a substitution, but five-man infields will still be allowed, MLB executive vice president Morgan Sword said.

Seattle Mariners manager Scott Servais said the shift has taken a lot away from opposing offenses as it's proliferated through the last decade.

"The shift will be a big change," he said. "I think you'll see teams attack it differently. There will probably more premium on defensive athleticism, you know, because with the shift if you had one guy that maybe wasn't great with his lateral range, you could hide him or you could put him in a spot that's more conducive for him to make a play. So that'll be a little bit of a change. It'll be a challenge. I know a lot of hitters that are smiling today, knowing that that'll help them in the future."

Base size will increase to 18-inch squares from 15 — first basemen are less likely to get stepped on.

"I don't mind them. I think it'll be OK," Mariners first baseman Ty France said of the rule changes. "I think there'll be more offense involved. I think the hardest part will be getting used to the pitch clock, which I don't think a lot of guys will have issues with, but there'll be a handful that (will). You know, it's a learning curve. I'm all for the bigger bases. It protects me, so I'm all about it."

In addition, each team will be allowed a sixth mound visit in the ninth inning next year, if it has used five during the first eight innings.

"It’s going to be hard on guys. ... It’s a shame that we weren’t taken more seriously," Merrifield said. "It’s an overcorrect and they’re going to have to tweak it. And that’s just what we were trying to avoid."

Mariners pitcher Marco Gonzales echoed similar frustrations about the process and said he believed the game would be unnecessarily expedited at times to the detriment of players.

"When has it been a two-way conversation?" Gonzales said of the dialogue between the league and players. "I mean, the players voted against this and it still was implemented. So I hope that we're looking out for the interests of the players in this game as much as we are for the fans. But players, we play this game our entire lives. And so for us, it's natural to us and so if we are against something, it's usually for a good reason. And so we just want our voices to be heard."

"It’s hard to get consensus among the group of players on changing the game," Manfred said. "I think at the end of the day what we did here was about giving fans the kind of game they want to see."

The rule changes won't go into effect until next season. Servais says he's not worrying about them until then.

"The rules haven't changed tonight," Servais said. "So I won't worry about it until probably get into the offseason and next season. So we'll focus on this year's rules tonight and go from there."

Information from the Associated Press contributed to this report.