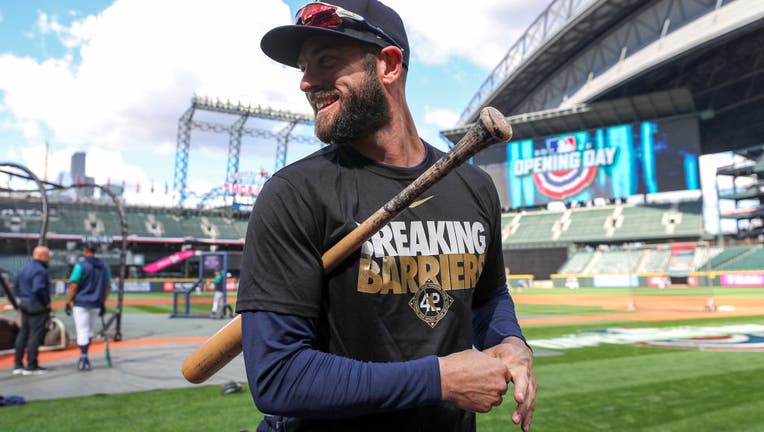 SEATTLE, WASHINGTON - APRIL 15: Mitch Haniger #17 of the Seattle Mariners looks on during batting practice before the game against the Houston Astros at T-Mobile Park on April 15, 2022 in Seattle, Washington. All players are wearing the number 42 in

Outfielder Mitch Haniger and reliever Paul Sewald both rejoined the Seattle Mariners in Tampa ahead of their series with the Rays beginning Tuesday. However, neither player has yet been activated from the COVID injured list.

"They're using today to kind of get back from it and get their feet back underneath them since they've had that time off," acting manager Kristopher Negrón said. "They're cleared to use all the facilities and be a part of our teamwork out early today. Looking forward to having them back here real soon."

Haniger was placed on the list on April 16 after playing in the team's home opener against the Houston Astros the night before. Sewald would go on the list four days later as Sewald, manager Scott Servais and bench coach Manny Acta also tested positive. Infield coach Perry Hill and replay coordinator Andy Bissell had also been among many positive cases within the team.

Via Ryan Divish of the Seattle Times, Servais has rejoined the team as well and will manage the game against the Rays.

"Skip's feeling much better," Negrón said of Servais pre-game. "We're looking to be a full staff – staff and players – sooner rather than later."

Catcher Luis Torrens was activated from the COVID-IL on Monday and is available tonight against the Rays. Tom Murphy is getting the start at catcher against Tampa.

The Mariners went 7-2 on their opening home stand despite the health issues around the team. Seattle is a half game back of the Toronto Blue Jays for best record in the American League.