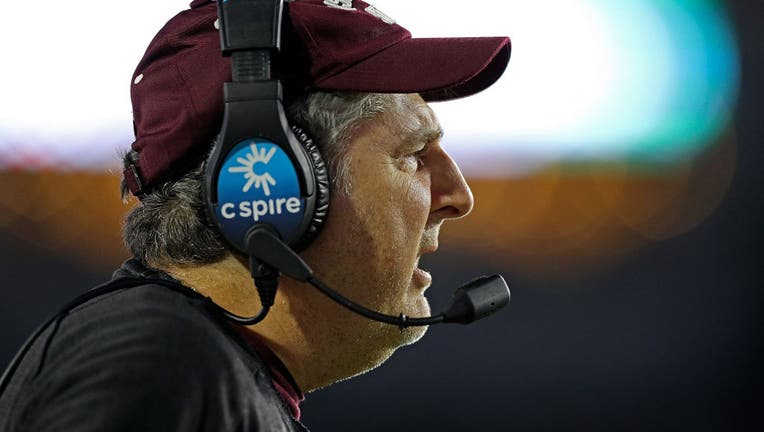 OXFORD, MISSISSIPPI - NOVEMBER 24: head coach Mike Leach of the Mississippi State Bulldogs. during the first half against the Mississippi Rebels at Vaught-Hemingway Stadium on November 24, 2022 in Oxford, Mississippi. (Photo by Justin Ford/Getty Imag

Mississippi State football coach Mike Leach was hospitalized on Sunday have he suffered a "personal health issue" at his home, the school said in a statement.

Mississippi State football is preparing to play in the ReliaQuest Bowl at Raymond James Stadium on New Year’s Day in Tampa, Florida. For now, Leach has not been ruled out. Instead, the school said defensive coordinator Zach Arnett was put in charge of the team until Leach returned.

"Mississippi State University Head Football Coach Mike Leach had a personal health issue at his home earlier today," the school said. "That issue led to a decision to transfer Coach Leach to the University of Mississippi Medical Center in Jackson by ambulance."

"That is the extent of information that MSU has available regarding Coach Leach's condition, and the university will make no other comment at this time other than to say that the thoughts and prayers of the university are with Mike and Sharon and their family."

Leach, 61, took over at Mississippi State before the 2020 season after a successful eight years at Washington State. In 36 games since 2020, he is 19-17 and has led the Bulldogs to a bowl game in each of his first three seasons.

Mississippi State was 8-4 this season and Leach went viral several times while talking to reporters.