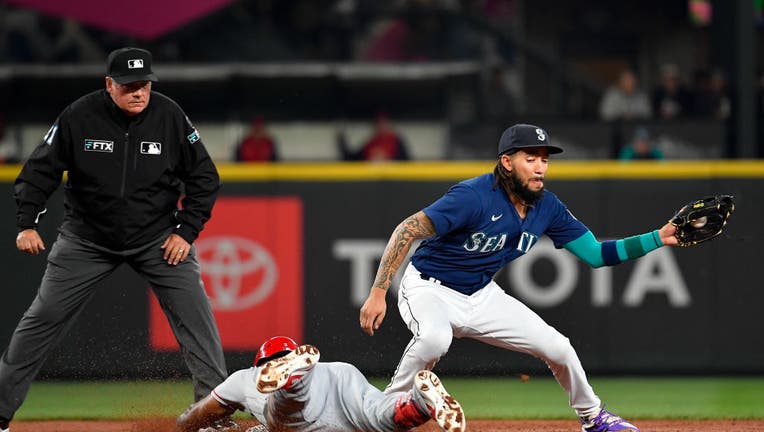 SEATTLE, WASHINGTON - JUNE 18: Luis Rengifo #2 of the Los Angeles Angels is safe at second base during the second inning against the Seattle Mariners at T-Mobile Park on June 18, 2022 in Seattle, Washington. (Photo by Alika Jenner/Getty Images)

SEATTLE - Jimmy Herget smiled at the question, perhaps because as Mike Trout’s teammate, he doesn’t have to face the three-time MVP.

Los Angeles won the first game 4-2 after Trout hit a two-run drive with two outs in the 10th inning off Diego Castillo.

Trout hit his 20th homer of the season and his 32nd at T-Mobile Park with a solo shot off Tommy Milone (0-1) with two outs in the third inning. The pitch wasn’t in the strike zone, but Trout barreled it up and drove it out to center field.

"My best pitch is a changeup, so I’m gonna throw it, but I think the way he’s been hitting he’s extending his arms and he’s pretty powerful. So obviously, you saw it right there," Milone said.

Trout is the first Angels player to homer in both games of a doubleheader since Albert Pujols on July 20, 2015 against Boston. He’s one of four Angels to accomplish the feat in the last 45 years.

He has four homers in the series after hitting two in the opener Thursday night.

Walsh added a two-run shot in the seventh off Seattle reliever Sergio Romo. Five of the seven runs scored in the doubleheader by the Angels came via the longball.

Walsh wasn’t feeling good on Friday but played the entire first game and added a big blow late in the second.

Angels starter José Suarez was added as the 27th man for the doubleheader and scattered four hits over 4 1/3 shutout innings. He managed to leave the bases loaded in the first inning with a pair of strikeouts, and Seattle’s scoring chances were otherwise scarce.

Herget (2-1) allowed one hit over 3 2/3 innings, and Archie Bradley pitched the ninth for his second save.

It was a rare doubleheader in Seattle, just the fourth since T-Mobile Park opened in 1999 and the first nine-inning twinbill since 2007. Seattle played a doubleheader against Oakland during the pandemic shortened 2020 season, but both games were seven innings.

Trout’s 50th homer against the Mariners was the difference in the first game. Trout struck out three times earlier in the game, but he connected when manager Scott Servais opted against intentionally walking him with a base open in extra innings.

Seattle’s bullpen retired 13 straight batters before Trout’s homer, Castillo had not allowed a run in his past nine appearances and Shohei Ohtani waited on deck. All that played into the decision to pitch to Trout.

"You can’t go up to the box and think that. I’m thinking hit the whole time and then if they tell you to go to first base, you go to first base," Trout said after the first game. "You can’t put that mentality or that comment in your head. Then you’re up there second guessing."

Seattle’s Dylan Moore homered and Julio Rodríguez had an RBI single in the first game, but that accounted for all the Mariners’ offense over 19 innings. Rodríguez doubled twice in the second game.

Seattle was shut out for the third time during its 11-game homestand.

"We have to make adjustments in this league. If we don’t, this is going to continue to happen. And it’s unacceptable," Servais said. "We have a better team than this. We really do. And we did have a bad day. We’ve had bad days before and you have to bounce back. But we have to start making some adjustments."

Raisel Iglesias (2-4) pitched a perfect ninth inning for the Angels and José Quijada worked the 10th to earn the save in the first game.

Seattle wore uniforms from the 1946 Seattle Steelheads for the opening game of the doubleheader, honoring the former Negro League franchise.

David MacKinnon made his major league debut in the second game after being selected from Triple-A Salt Lake. Injured 3B Anthony Rendon was transferred to the 60-day injured list and RHP Austin Warren was placed on the 15-day IL with a right triceps strain. MacKinnon was 0 for 2.

Angels: LHP Kenny Rosenberg (0-0, 7.50) will be recalled from Salt Lake to make his first start. The 26-year-old rookie has made two appearances in relief for the Angels this season.

Mariners: RHP Logan Gilbert (7-2, 2.22) looks to join the group of AL pitchers with eight wins. Gilbert has won three straight decisions, including his last outing against Minnesota where he tossed six shutout innings allowing four hits. In his past four starts, Gilbert has a 1.44 ERA and 21 strikeouts in 25 innings pitched.