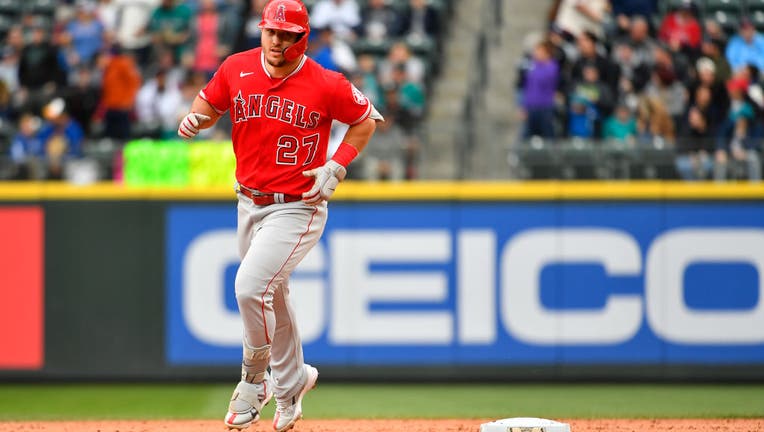 SEATTLE, WASHINGTON - JUNE 18: Mike Trout #27 of the Los Angeles Angels rounds the bases after hitting a two-run home run in the 10th inning against the Seattle Mariners at T-Mobile Park on June 18, 2022 in Seattle, Washington. The Los Angeles Angels

SEATTLE - Mike Trout had a rather miserable afternoon at the plate until the Seattle Mariners made the mistakes of pitching to him in extra innings.

The three-time MVP hit a two-run homer in the top of the 10th inning and the Los Angeles Angels beat the Seattle Mariners 4-2 on Saturday in the opening game of a doubleheader.

Trout hit his 50th career homer against Seattle and 31st at T-Mobile Park on a 1-1 pitch from Diego Castillo (3-1). Trout had struck out three times earlier in the game. Instead of putting him base with an intentional walk, Trout hit his 19th long ball of the season.

"You can’t go up to the box and think that. I’m thinking hit the whole time and then if they tell you to go to first base you go to first base," Trout said "You can’t put that mentality or that comment in your head. Then you’re up there second guessing."

Seattle’s bullpen had retired 13 straight batters before Trout’s homer. Castillo had not allowed a run in his past nine appearances. And Shohei Ohtani waited on deck.

All that played into the decision of Seattle manager Scott Servais to pitch to Trout.

"Those are decisions you have to make. I get paid to make those decisions. I need to be right more than I’m wrong," Servais said. "But I’ve got to give him credit. He hit the ball out of the ballpark. He just didn’t get a hit."

Angels interim manager Phil Nevin said he thought the pitch from Castillo was in a good location. Trout is just that talented.

"He’s a pretty darn good reliever. He made some good pitches before that," Nevin said. "It was actually a pretty good pitch. Mike just went out and got it."

Raisel Iglesias (2-4) pitched a perfect ninth inning for the Angels and José Quijada worked the 10th to earn the save.

It was the opener of a rare doubleheader in Seattle, just the fourth since T-Mobile Park opened in 1999 and the first nine-inning twinbill since 2007. Seattle played a doubleheader against Oakland during the pandemic shortened 2020 season but both games were seven innings.

Seattle took a 1-0 lead on Dylan Moore’s home run in the third inning and pulled even at 2 in the seventh on Julio Rodríguez’s RBI single.

Los Angeles got a two-run double from Kurt Suzuki with two outs in the fourth inning that just eluded a diving attempt by Moore in left field.

Seattle will lament the missed chances it had earlier in the game.

Rodríguez’s RBI single came on an 0-2 pitch from Archie Bradley, just his second hit all season on an 0-2 pitch. But Seattle failed to take the lead as Ty France struck out and J.P. Crawford grounded out with the go-ahead run at third.

Jesse Winker and Adam Frazier each singled with one out off Ryan Tepera in the eighth, but Winker was stranded at third.

Seattle wore uniforms from the 1946 Seattle Steelheads for the opening game of the doubleheader, honoring the former Negro League franchise.

Angels: 1B Jared Walsh was back in the lineup for the first game after feeling ill on Friday. Nevin said 1B David MacKinnon, who was with the team from Triple-A Salt Lake, was going to start the second game.

Mariners: DH Justin Upton was back in the lineup a night after a scary moment where he was hit in the head. Servais said he checked with Upton on Saturday morning and said the slugger felt ready to play.

Angels: LHP José Suarez (0-2, 5.96) was added as the 27th man for the doubleheader. It will be his sixth start this season with the Angels, but his first since June 7 when he threw five innings against Boston.

Mariners: Seattle will use reliever Penn Murfee as an opener and go from there, Servais said. LHP Justus Sheffield was added as the 27th player prior to Game 1.

The Mariners added left-handed pitcher Tommy Milone to their roster from Triple-A Tacoma ahead of the second game of Saturday's double header.

Right-handed pitcher Matt Festa was optioned to Tacoma and reliever Joey Gerber was designated for assignment to clear spots for Milone on the 27- and 40-man rosters, respectively.

Milone, 35, appeared in 23 games for the Mariners in 2019 and has started seven games for the Rainiers this season. Milone has posted a 3–0 record with a 1.13 ERA with eight walks and 29 strikeouts. Milone pitched for the Toronto Blue Jays last season.

Festa, 29, has appeared in 21 games in relief with the Mariners this season. He has a 4.35 ERA while allowing seven walks with 31 strikeouts. He missed 15 games on the injured list from May 5 to May 20 with right elbow tendinitis.

Gerber, 25, hasn't pitched with the Mariners since 2020 after missing all of last year with a back injury. He posted a 1-1 record with a 4.02 ERA with five walks and six strikeouts in 11 appearances with Seattle in 2020.