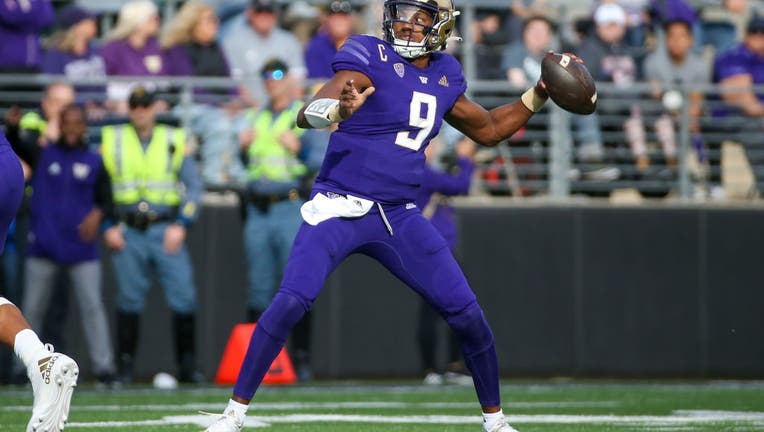 SEATTLE - Washington quarterback Michael Penix Jr. threw for 397 yards and four touchdowns – three of which were caught by Ja'Lynn Polk – as the Huskies cruised to a 39-28 victory over the 11th ranked Michigan State Spartans on Saturday.

Penix's aerial assault carried the Huskies (3-0) to 503 yards of total offense on the night. The Huskies scored touchdowns on five of their six possessions in the first half with the only failed scoring drive being a Michigan State goal line stand.

"He's just putting the ball where it needs to go," head coach Kalen DeBoer said of Penix. "He's seeing the field and the line is time, he isn't taking sacks. Even when it does breakdown a bit and he got flushed, I have confidence in him taking care of the football. … He's just so calm and collected, mentally has been in all these positions, been in so many close games over the years and big-time games that he just goes about his business and believes in himself. And he's got a great supporting cast around him that are making plays for him too. That adds a lot to it. "

Polk was the standout target of the night for Penix, catching six passes for 153 yards and three touchdowns.

"He works hard and he's comfortable with us," Polk said of Penix. "He trusts us. He knows that we're going to do everything that we can do in order to protect him and get that ball out of the air."

The game was a total landslide in Washington's favor throughout the first half. Michigan State (2-1) was held to under 30 yards of total offense until their final drive of the half got them on the scoreboard. But in the final 1:30 of the quarter, Penix authored another scoring drive for the Huskies complete with a 17-yard touchdown pass to Polk to give Washington a 29-8 halftime advantage.

"I feel real comfortable out there," Penix said. "Knowing that I've got five guys up there that are going to protect me each and every play. They'll go to war for me and I'll do the same thing for them. I've got weapons on the outside that are going to find a way to get open, so they make it easy for me."

The Huskies didn't punt until the final minute of the third quarter. Penix also wasn't sacked a single time despite the Spartans entering the game as the best sacking defense in the country.

"For us to not give up any sacks and not have any turnovers, that's just a huge part of what it took to win tonight," DeBoer said.

A 47-yard strike from Penix to Jalen McMillan on the opening drive set up Washington's first score of the night. An 8-yard touchdown pass from Penix to Polk give the Huskies an early 7-0 lead.

After running back Wayne Taulapapa was stopped at the goal line, Cameron Davis and Penix were each turned away as well as the Spartans kept Washington out of the end zone. But Jarek Broussard would get tripped up by one of his own offensive linemen in the end zone and failed to get out of the backfield for safety that gave the Huskies a 9-0 edge.

Michigan State kicked the ensuing free kick out of bounds to give the Huskies possession at midfield. A 27-yard completion from Penix to tight end Jack Westover put Washington back on the Spartans' door step. Davis scored on a 2-yard touchdown run to give the Huskies a 16-0 lead.

After a Voi Tunuufi sack of Payton Thorne stalled another Michigan State drive, Penix and Polk connected for a 37-yard completion to kickstart another drive. A missile of a back-shoulder throw from Penix to Taulapapa went for a 19-yard score that gave Washington a 22-0 lead after a failed extra point.

The Spartans went into desperation mode for the rest of the night, frequently leaving their offense on the field for fourth downs as they attempted to claw back into the contest. A fourth down scramble on fourth-and-5 from Thorne for 11 yards kept the last drive of the half for Michigan State alive. He then found Keon Coleman for a 7-yard touchdown to get the Spartans on the board. A two-point conversion throw to Coleman was also successful to make it a 22-8 game.

Penix then delivered a fourth down conversion as well with a 17-yard completion to tight end Devin Culp ahead of Polk's 17-yard score to take a 29-8 lead into halftime.

Thorne made the most of another fourth down try on Michigan State's opening drive of the third quarter. On fourth-and-6, Thorne connected with Tre Mosley for a 26-yard touchdown over Dominique Hampton and Kamren Fabiculanan to cut the UW lead to 29-14 after a failed two-point conversion try.

But Washington would immediately answer. Penix and Polk struck again on a 53-yard bomb to extend the Huskies lead to 36-14.

A 26-yard Peyton Henry field goal extended the lead to 39-14 early in the fourth quarter. The Spartans managed to cut into the final deficit with consecutive scoring drives. Elijah Collins scored on a 1-yard run and Thorne connected with Coleman again for a 33-yard touchdown as Michigan State made it a 39-28 game with 5:17 left.

But a failed onside kick gave Washington the ball and the Spartans were unable to keep the chains moving on their final possession.

McMillan caught six passes for 94 yards on the night for Washington. Davis added 69 yards and a touchdown on the ground.

Thorne finished the night completing 30-of-42 passes for 323 yards with three touchdowns and an interception by Julius Irvin. Coleman caught nine passes for 116 yards and two scores for Michigan State.

The Huskies will likely move into the Top 25 after the victory over Michigan State. They host Stanford at home again next Saturday.