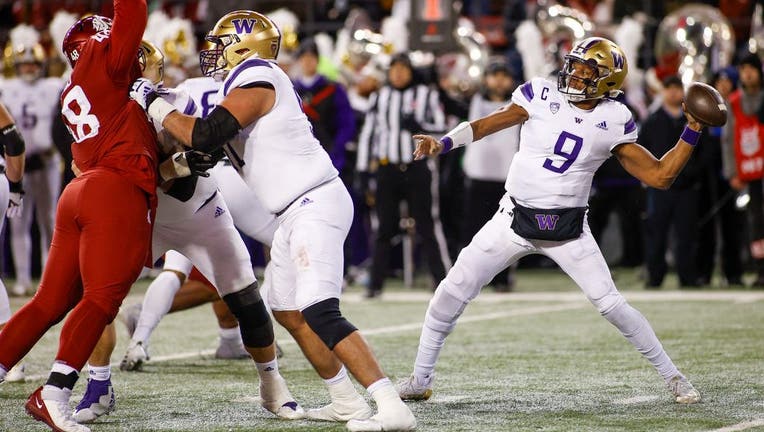 Michael Penix Jr. passed for 484 yards and three touchdowns and added two more scores on the ground as the No. 12 Washington Huskies beat the Washington State Cougars 51-33 to win the Apple Cup on Saturday night.

Washington (10-2, 7-2 Pac-12) put up 703 yards of total offense on the night, which is the third-most in school history. The 84 combined points scored make it the highest-scoring Apple Cup in the series' history. A 51-32 Washington victory over the Cougars in Spokane in 1976 had served as the previous record.

The Huskies remain in the hunt for a berth in a New Year's Six bowl game depending on the outcome of the Pac-12 Championship Game between USC and Utah.

Cam Ward threw for 312 yards with two touchdowns and a rushing score for Washington State (7-5, 4-5 Pac-12) in the loss. Nakia Watson had 73 yards rushing with a rushing and receiving touchdown each for the Cougars as well.

Both teams traded blows in the first half as the two teams combined for seven lead changes, 55 combined points, 630 yards of combined offense and nine scoring drives in 11 first-half possessions. The Huskies then outscored WSU 23-6 in the second half to reclaim the Apple Cup and reach ten wins in Kalen DeBoer's first year as head coach.

Dean Janikowski's 50-yard field goal try on Washington State's opening possession landed on the crossbar before kicking through the uprights to give the Cougars an early 3-0 lead.

After the teams traded their only scoreless drives of the half, Washington quickly moved for their first score of the night. Penix connected with Polk for a 26-yard touchdown that gave the Huskies a 7-3 lead.

A fake punt by the Cougars saw punter Nick Haberer complete a pass to Daiyan Henley for 36 yards on fourth-and-1 to set up another Washington State touchdown. Seven plays later, Ward kept for a 14-yard touchdown take give the Cougars a 10-7 lead.

Penix delivered a 47-yard touchdown strike to Odunze to put Washington back on top. Odunze went over the 1,000-yard receiving mark for the season for Washington. He's the first Husky since John Ross in 2016 to have 1,000 yards in a season.

Ward then slithered out of three possible sacks to find Robert Ferrel for a 34-yard touchdown as the teams continued to trade blows. Ferrel had 71 yards on four receptions to lead the Cougars receiving effort.

A double pass from Penix to McMillan and back to Penix sprung the UW quarterback for a 30-yard touchdown run as the Huskies took a 21-17 lead.

Ward answered with a 15-yard swing pass to Watson for a touchdown as the Cougars took the lead for the final time in the half.

A 48-yard strike to Odunze sparked another Washington scoring drive. Penix scored his second rushing touchdown of the night on a 4-yard keeper as the Huskies took a 28-24 lead.

Ward led the Cougars inside the UW 10-yard line in the closing second of the half, but Washington State had to settle for a 29-yard Janikowski field goal at the Huskies took a 28-27 lead into the break.

It took just one play for the Huskies to extend their lead coming out of the locker rooms. Penix delivered a perfect ball to McMillan for a 75-yard touchdown as the Huskies lead grew to eight, 35-27.

Cameron Davis fumbled on Washington's next possession to snap a run of five straight touchdown drives for the Huskies. A nine-play, 58-yard drive for WSU led to Watson's 4-yard touchdown that pulled the Cougars within two. However, Ward's scramble on a two-point conversion try was ruled just short of the goal line as the UW lead remained 35-33.

The WSU defense came up big again on the next Washington drive as Derrick Langford picked off Penix in the end zone to thwart another Husky scoring opportunity.

A 41-yard strike from Penix to Polk set up a 5-yard touchdown run from Odunze on a jet sweep that pushed the UW lead to 41-33 on the second play of the fourth quarter after a missed extra point.

Washington finished the night 11-of-13 on third down as the Cougars just couldn't get the Huskies offense off the field without turnovers.

Ward was sacked by Jayvon Parker to end the Cougars next drive and Payton Henry added a 20-yard field goal as the UW lead grew to 44-33. After a turnover on downs by the Cougars, Taulapapa sprung free for a 40-yard touchdown run as the final icing on the victory for the Huskies.