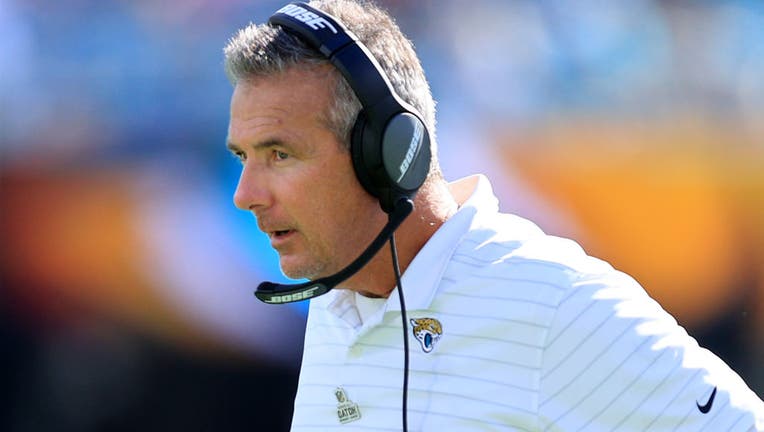 JACKSONVILLE, FLORIDA - OCTOBER 10: Head coach Urban Meyer of the Jacksonville Jaguars looks on during the game against the Tennessee Titans at TIAA Bank Field on October 10, 2021 in Jacksonville, Florida. (Photo by Sam Greenwood/Getty Images)

Meyer was taking over at Utah in 2003 and Carroll was about to lead USC to one of college football’s most dominant stretches, a 34-game winning streak that was later partially vacated because of NCAA violations.

When Meyer decided to make the leap to the NFL, he naturally turned to Carroll again. Meyer brought in 11 players or coaches from Seattle, where Carroll has spent the past dozen years and won Super Bowl 48. Nine of them remain.

"That is not by accident," Meyer said. "It is a sign of respect for an organization and a coach."

"Being back in Seattle and seeing the guys I have not seen for a minute, I am going to love that," Griffin said. "Playing in front of the 12s is going to be fun either way it plays out. I am excited. I do not think I am going to treat it any differently. I am just preparing for another team I am trying to beat, and we are trying to win. That is my main focus.

"Of course, being back in that city that taught me so much that I am still grateful for. But now it is business."

Jacksonville, which ended a 20-game skid by beating Miami in London, is coming off a bye week and gets Seattle on a short week; the Seahawks lost 13-10 to New Orleans on Monday night.

But the Jaguars are winless in three trips to Seattle, part of their long history of struggles on the West Coast. They are 3-13 on the opposite coast, with all three wins coming in Oakland.

Seattle has been Jacksonville’s worst travel destination, with the visiting team getting outscored 110-32 in those three meetings.

"You can’t look at the past," Jaguars defensive tackle Roy Robertson-Harris said. "Everybody’s talking about last year and things that happened previously. That (stuff)’s done with. You’ve got to continue to move on, and everything’s a game at a time. Our goal is 1-0 every week and just looking for that next win."

The Jaguars believe rookie quarterback Trevor Lawrence, the overall No. 1 draft pick who has played much better the past three games than the first three, gives them a chance every week. It’s similar to the run Seattle enjoyed the past 10 years with Russell Wilson.

Wilson, who is sidelined after having surgery for a dislocated finger on his throwing hand, is 100-48-1 as a starter. The Hawks are 0-2 without him, averaging a measly 15 points a game.

"It’s going to be exciting," Bevell said. "I loved Seattle. I had a great time when we were there. We won a lot of games. Love Coach Carroll. I have a lot of respect for him and the staff. ... There’s a lot of great memories from the place, and I was there for a long time."

Meyer spent even more time learning from Carroll. He adopted Carroll’s rugby-style tackling technique, his belief that competition rules everything and that you need to keep it light.

"I’ve read about him. I’ve studied his stuff. I’ve talked to him several times," Meyer said. "He’s been great to me over the years. ... It’s not by accident he’s successful."