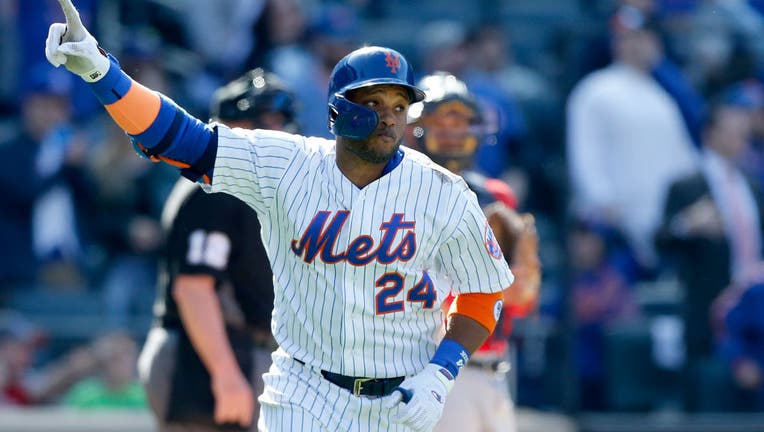 NEW YORK, NEW YORK - APRIL 06: Robinson Cano #24 of the New York Mets celebrates his eighth inning home run against the Washington Nationals at Citi Field on April 06, 2019 in the Flushing neighborhood of the Queens borough of New York City. (Photo b

NEW YORK - Mets second baseman Robinson Canó was suspended for 162 games by Major League Baseball on Wednesday after he tested positive for a performance-enhancing drug for the second time in his decorated career.

The 38-year-old Canó will miss the entire 2021 season and lose $24 million in salary. The eight-time All-Star hit a robust .316 with 10 home runs and 30 RBIs in this year’s pandemic-shortened season.

Minus Canó, New York could move good-hitting Jeff McNeil into a regular spot at second base. The suspension also will surely prompt calls by Mets fans to sign free agent DJ LeMahieu, an AL MVP candidate this year with the Yankees.

The penalty came less than two weeks after Steve Cohen bought the Mets for $2.4 billion, a move that created an avalanche of positivity for a team that has reached the playoffs just three times in the last 20 years.

The commissioner’s office said Canó tested positive for Stanozolol, an anabolic steroid. He was penalized 80 games in May 2018 while with Seattle after a positive test for Furosemide, a diuretic that some athletes have used to mask other substances.

“We were extremely disappointed to be informed about Robinson’s suspension for violating Major League Baseball’s Joint Drug Prevention and Treatment Program,” new Mets president Sandy Alderson said in a statement. “The violation is very unfortunate for him, the organization, our fans, and the sport. The Mets fully support MLB’s efforts toward eliminating performance-enhancing substances from the game.”

There was no immediate comment from Canó or the players’ union.

Alderson was hired by Cohen on the day the Mets sale was completed. General manager Brodie Van Wagenen exited the same day — Van Wagenen made the trade to get Canó from Seattle in December 2018 after previously being his agent.

In a move that polarized Mets fans, the high-priced Canó and big league saves leader Edwin Díaz were acquired in a deal that sent top outfield prospect Jarred Kelenic and young pitching to the Mariners.

Canó was set to head into the eighth year of his $240 million, 10-year contract. He will not be eligible for the playoffs if the Mets make the postseason.

In 16 seasons, he is a career .303 hitter with 1,302 RBIs and two Gold Gloves. He played 49 games this year in a season shortened from the usual 162 to 60 because of the coronavirus pandemic.

Canó became a star with the Yankees, then signed a big contract with the Mariners. His ban during the 2018 season made him among the most prominent players penalized under baseball’s anti-doping rules.

At that time, Canó said the diuretic “was given to me by a licensed doctor in the Dominican Republic to treat a medical ailment.” Canó said he didn’t realize the drug was banned by MLB.

McNeil has hit .319 in three seasons with the Mets and was an All-Star in 2019. Second base is probably his most natural position, though he’s done fine while also playing third base, left field and right field.