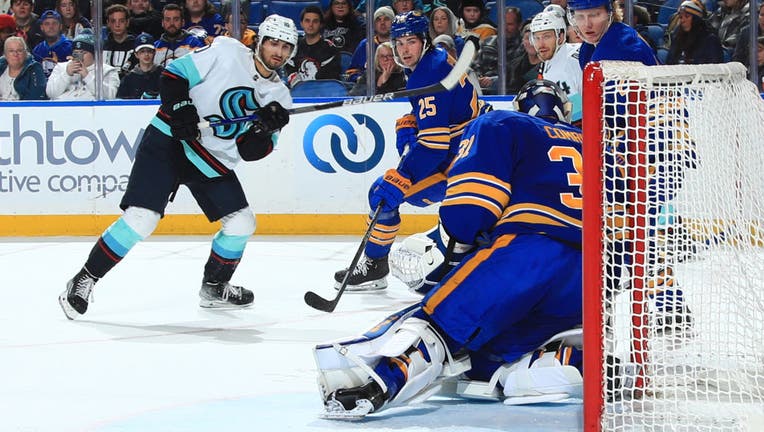 BUFFALO, NY - JANUARY 10: Matty Beniers #10 of the Seattle Kraken watches as Eric Comrie #31 of the Buffalo Sabres makes a save on his shot during an NHL game on January 10, 2023 at KeyBank Center in Buffalo, New York. (Photo by Bill Wippert/NHLI via

BUFFALO, N.Y. - Matty Beniers, Justin Schultz and Jordan Eberle each had a goal and an assist for Seattle, which rallied to beat the Buffalo Sabres 4-3 on Tuesday night for the Kraken’s sixth consecutive win.

Yanni Gourde also scored, Andre Burakovsky had two assists and Philipp Grubauer made 32 saves in the fifth of a seven-game trip, Seattle’s longest of the season.

"You are going to have games like this, on a back-to-back, where it doesn’t look all that good, it doesn’t look pretty," Kraken coach Dave Hakstol said. "But that’s a great win for our group, to stick together and get it done."

Alex Tuch scored twice for the Sabres, Rasmus Dahlin had a goal and an assist and Jeff Skinner tallied two assists. Sabres goalie Eric Comrie stopped 18 shots in his first start since sustaining a lower-body injury on Nov. 16.

It was Buffalo’s second home loss in as many nights after winning eight of nine games.

"We had some momentum for the majority of the game and we kind of sat back a little bit," Tuch said. "Got a little frustration, left some spots open in the D-zone, and that’s when they capitalized."

Beniers set up Schultz for a one-timer from the high slot at 5:17 of the third after scoring the go-ahead goal at 1:06 into the period. The Kraken’s 20-year-old All-Star got his 16th goal of the season when he dove at the left edge of the crease to knock in the rebound from Vince Dunn’s shot that hit the post.

"He’s got some dynamic ability in open ice and finding plays," Hakstol said about Beniers. "But he’s also got that moxie and grit to go to some of those hard areas."

The Kraken tied it when Schultz fed Gourde in front of the net about nine minutes into the second period, after Dahlin’s power-play goal but Buffalo ahead a few minutes earlier.

Eberle’s equalizer came on a power play late in the first period when he tipped Burakovsky’s shot past Comrie.

"I don’t think we had our best start, but that goal kind of got us back in it and got us feeling good coming into the room," Schultz said. "And we kind of grinded this one out tonight."

The Sabres did not have shot on goal before Tuch put them ahead at about 10 minutes into the game. Buffalo’s All-Star center Tage Thompson created the scoring chance when he drove to the left side of the net and slid a backhand pass to Tuch in the slot.

Tuch knocked in a rebound for his 20th goal of the season with 20.8 seconds left in the third after the Sabres pulled Comrie for an extra skater.

Comrie returned to the net a couple days ahead of schedule after Ukko-Pekka Luukkonen’s illness altered the planned starting rotation. Luukkonen has the NHL’s longest active win streak at six games. The rookie goalie was sent to the minors on Monday, but Buffalo intends to recall.

Kraken: At Boston on Thursday.