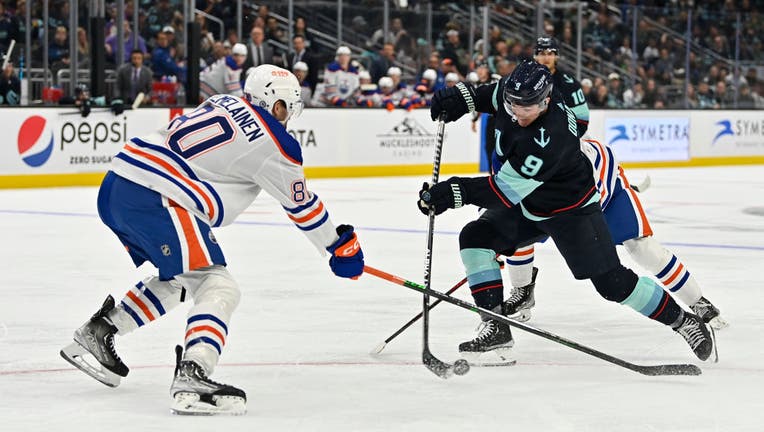 SEATTLE, WASHINGTON - SEPTEMBER 26: Ryan Donato #9 of the Seattle Kraken in action against Markus Niemelainen #80 of the Edmonton Oilers during the second period at Climate Pledge Arena on September 26, 2022 in Seattle, Washington. (Photo by Alika Je

SEATTLE - Matty Beniers and Ryan Donato each scored goals as part of a second-line pairing with newcomer Oliver Bjorkstrand as the Seattle Kraken earned a 3-0 victory over the Edmonton Oilers in their first preseason game of the season.

Beniers pulled a pass from Peetro Seppälä up from deep behind him and sniped the puck over the near-side shoulder of goaltender Olivier Rodrigue into the net from a tight angle to give the Kraken a 1-0 lead.

Beniers scored points in nine of his 10 games played with the Kraken last year after joining the team in April. He notched three goals and six assists in his stint with the Kraken last spring after a final college season with the University of Michigan. He seems poised to pick up right where he left off at the end of the season.

"Playing those 10 games (last year) helped you kind of get acclimated and you know more guys in the locker room, you feel a little bit more comfortable, you know?" Beniers said. "So definitely, definitely really helpful being able to do that."

Not only did Beniers score the one goal, he created several more chances for the Kraken offense. He had six shots on net on the night to lead all Kraken skaters. He had some nifty saucer passes across the Oilers zone on power play chances and also drew a hooking penalty as he carried the puck from the Seattle end across the blue line into the Edmonton zone.

"He's been skating well, been really confident with the puck and he's seeing the ice really well also," head coach Dave Hakstol said of Beniers. "Real positive, real positive things that he's doing and just the way he's working, skating and competing. I'll put that at the top of the list. He's driving the compete level."

Beniers paired with Donato and Jordan Eberle for most of his 10-game stretch to end last season in Seattle. While Donato and Beniers remained together, they had Bjorkstrand as the third member of their line against Edmonton. Bjorkstrand is coming off a career-high 57 points with 28 goals last season for the Columbus Blue Jackets before coming over to Seattle in a trade this offseason.

Beniers and Bjorkstrand then paired with Alex Wennberg, Andre Burakovsky and defenseman Justin Schultz on the top power-play unit against the Oilers.

"There's been a little bit of chemistry on the Wennberg unit," Hakstol said. "We've seen it a little bit -- only worked on it for a few minutes in practice, really. But we got in the zone well. … "Got set up and built some momentum as we went through the game.

"Probably a little bit of fatigue on the side of the (penalty killers) on the other side, but that comes from generating possession, finding retrievals and having good puck speed. And that's probably the biggest thing that I liked tonight. I thought, after our entries, that we had pretty good puck speed on that unit."

Martin Jones and Joey Daccord split the goaltending duties with Jones starting the game and making 13 saves in 32 minutes of action. Daccord replaced him midway through the second period and made 16 saves as the duo combined for a clean sheet. Daccord also got on the scorecard for the night with a terrific assist to Donato.

Shortly after entering the game, Daccord caught a puck, quickly dropped it on the ice and fired a pass ⅔rds of the way up the ice to Donato as the Edmonton blue line. Donato crashed in on net and then went for a wraparound try that beat goaltender Ryan Fanti to make it a 2-0 game.

Daccord immediately gave credit to Donato for the play he made to score.

"I just took a quick peek and saw him coming off the bench and I didn't even hesitate," Daccord said. "I just put it down and ripped it up there and saw him and just hit him. That was an unreal finish. He earned me that apple."

Early in third period with Seattle in the process of killing off a five-minute major penalty from Jacob Melanson for an illegal check to the head of Oilers winger James Hablin, Brandon Tanev manages to chip a puck out of the Seattle zone to create a two-on-one short-handed chance. Tanev crossed to Morgan Geekie whose one-timer beat Fanti to put Seattle up 3-0.

"To score the shorty is nice," Hakstol said. "It's a good individual play by Turbo to create the opportunity and it's nice for those guys to be able to finish it."

Tanev is back in the lineup for Seattle after missing over half of last year to a torn ACL sustained in a December game against the Oilers.

But the star of the night was Beniers. He was seemingly in the middle of every play when he was on the ice for the Kraken. The 2021 first-round pick was impressive yet again, just as he was in the closing stretch of last year for Seattle. While playing a full 82-game season will present a new challenge for Beniers to work through, he seems to be on the cusp of a breakout campaign for the Kraken.

"He's a heck of a player," Daccord said. "We all know that. We've all seen that in this little sample last year in training camp. He's just an awesome kid. Everyone loves him and really happy for him to see that success come right away. He's just such a great player and he's going to have a long career."