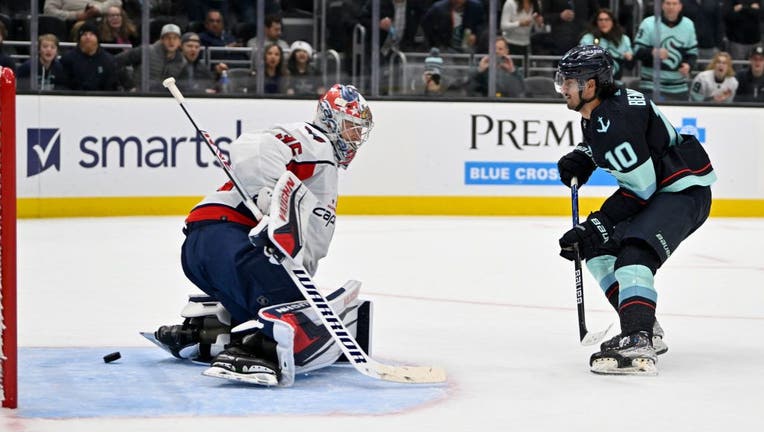 SEATTLE, WASHINGTON - DECEMBER 01: Matty Beniers #10 of the Seattle Kraken scores seven seconds into overtime for a 3-2 win against the Washington Capitals at Climate Pledge Arena on December 01, 2022 in Seattle, Washington. (Photo by Alika Jenner/Ge

Matty Beniers won the opening face-off in overtime and quickly beat Darcy Kuemper just seven seconds into the extra session as the Seattle Kraken extended their franchise-record winning streak to seven games with a 3-2 victory over the Washington Capitals on Thursday night.

Yanni Gourde's goal with 2:27 left to play was enough to extend the game into overtime for a fifth time in the last eight games. Beniers' goal gave Seattle their fourth straight OT win as the Kraken continue to climb up the NHL standings.

"That was a hard fought game. That's two good teams right down to the wire," head coach Dave Hakstol said. "We did a lot of little things that the guys in this room did during that hockey game in order to stay with it and you know, not just find one point but get the extra point in OT."

Beniers won the face-off against Lars Eller at center ice. Eller tried to kick the loose puck back to defenseman John Carlson, but it was knocked out of the air by André Burakovsky as the puck squirted into the Capitals zone. Beniers grabbed the loose puck as Eller and Carlson tripped each other leaving Beniers with a clean look on net as he decisively beat Kuemper between the legs to give Seattle the victory.

"I was excited," Beniers said, via ROOT Sports. "I was like ‘oh, nice! What's go on? Breakaway!’ Just went and shot it and it went in. It was great."

Beniers' goal capped a rally from a 2-0 first period deficit as the Capitals jumped out to the early lead. Philipp Grubauer made 21 saves on 23 shots in net for the Kraken with a trio of standout saves in the second period that kept the game within reach. After a 9-8 overtime win against the Los Angeles Kings on Tuesday, this was a game that far better suited the way the Kraken want and expect to win hockey games.

"I thought we played like we should play, like we're used to seeing the Kraken win games. This is exactly the type of game that we want to be in," Gourde said.

Beniers has 12 points with five goals and seven assists over Seattle's last six games, which was moved him into the leading contender for the Calder Trophy as the NHL's best rookie. His goal is the fastest goal by a rookie in overtime in NHL regular season history, surpassing the eight seconds of Walter Jackson of the New York Americans in 1933.

"Matty had some good opportunities tonight and he finished that one at the right time," Hakstol said.

The victory moves the Kraken (15-5-3, 33 pts) within two points of the Vegas Golden Knights (17-7-1, 35 pts) atop the Western Conference after a 4-3 loss to the Pittsburgh Penguins earlier in the night.

Seattle only allowed four shots in the first period, but two of them found the back of the net for Washington. An Alexander Ovechkin shot attempt bounced perfectly to Martin Fehervary for an uncontested slap shot that beat Grubauer to give Washington a 1-0 lead.

A breakaway chance for Jordan Eberle was turned away by Kuemper to preserve the Washington advantage. Eberle was later called for a tripping penalty against Trevor van Riemsdyk that gave the Capitals a power play chance. Conor Sheary scored off a perfect passing sequence from Ovechkin and former Kraken Marcus Johansson to make it 2-0 Capitals.

"It's not how we want to start things off but second period went well and that's a period I needed personally for myself to get back into it," said Grubauer, who missed 13 games with a lower body injury. "Vegas was good to win, but I didn't feel like I had a period where there were too many shots or too many saves, so second period was nice."

With Washington on another power play in the second period following a Gourde holding call, Grubauer delivered two big saves on shots from Ovechkin to keep the Capitals from further extending the lead.

After the successful penalty kill, the Kraken began to pressure more successfully in the offensive end. Jaden Schwartz hammered home a rebound off the end boards on a shot from Vince Dunn to cut the deficit to 2-1.

Shortly after the Schwartz goal, Beniers set up Eberle on a shot that beat Kuemper but deflected off the goal post and out to keep the game level.

Grubauer then delivered a phenomenal save as he made a sliding save in the splits to rob Evgeny Kuznetsov off a backhand pass from Oshie.

"Grubi made some big saves too. I mean it's not easy to save those shots from Ovi on that one-timer side and Grubi did," Gourde said of Grubauer. "All game long. Even those high tipped shots they had shooting from the point, there's a few high tips where he not only makes a safe but he freezes the puck right away too so it kills the play. So he did an amazing job and it's fun to see him having a great game like that."

After another successful penalty kill in the third period on Beniers' first penalty of his NHL career – an interference call against Anthony Mantha – the Kraken really gained momentum in the offensive zone. Burakovsky hit the post with 3:28 left as he nearly tied the game himself. Gourde then came around the back of the net to chip a rebound of a Daniel Sprong shot by Kuemper for the tying goal.

Beniers then quickly delivered the winning tally in the extra period.

"It happened so fast," Schwartz said. "I think I was grabbing water and I looked up and he was on a breakaway, so it happened fast. ... Super happy for him. That was a good finish."