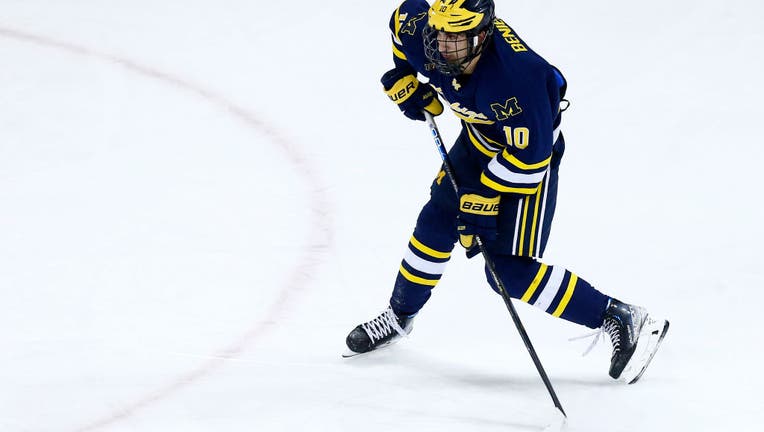 SOUTH BEND, IN - FEBRUARY 25: Michigan forward Matty Beniers (10) fires the pass in the second period of play during a mens college hockey game between the Michigan Wolverines and the Notre Dame Fighting Irish on February 25, 2022 at Compton Family I

SEATTLE - It won't be a surprise if No. 2 overall draft pick Matty Beniers is playing for the Seattle Kraken before the end of the season.

Beniers is currently set to begin a playoff run with the University of Michigan. The Wolverines are among the top teams in college hockey and had three players selected in the top five of last year's NHL Entry Draft. Beniers (No. 2, Seattle), defenseman Owen Power (No. 1, Buffalo Sabres), and center Kent Johnson (No. 5, Columbus Blue Jackets) all returned to Michigan to chase an NCAA title.

But once that run is done, Beniers could appear in a lineup with the Kraken in short order.

Speaking earlier this week, Kraken general manager Ron Francis spoke about the future ahead for Beniers. Since Beniers hasn't signed a contract with the team, Francis can't get too specific. However, he indicated it's likely Beniers will join the team – if he signs – before the end of the season.

"Usually with higher picks the agent and the player want you to, in essence, burn the year," Francis said of Beniers' entry-level contract. "So in theory, you know, if at the end of his season with Michigan, and if he wanted to come out, that's the deal we would most likely look to do is to try and sign him and burn a year, which would get him into our lineup.

"The NCAA Frozen Four is April 7th and 9th in Boston, so we would be after that point assuming that they're in the finals. But, you know, again, his focus right now is on winning a national championship, and we wish him all the best."

The Kraken maintain Beniers' rights through the entirety of his college career. If Beniers elected to spend another season in college, he could do so with the Kraken continuing to hold his professional rights.

However, Beniers appears ready to make the jump and said earlier this week that he believes he could handle the move as well.

"I think, going to the Olympics and playing there was good for me and to see where I'm at," Beniers said on Tuesday. "I think I can be good. I think, honestly, you never really know, but I think that whatever happens, you know, I think I'll make it work. … "I think with my speed and skill and work ethic I think I should be fine."

Future Seattle Kraken forward Matty Beniers believes he's a better skater and shooter than he was when he became Seattle's first ever draft pick last July. Playing in the Olympics for Team USA and chasing an NCAA title at the University of Michigan this season has helped prepare Beniers for his eventual move to the NHL.

Entry-level contracts in the NHL are three-year deals. Bringing in Beniers this year for the final stretch of games would count as the first year of his rookie contract despite playing in a limited number of games.

Francis acknowledged that it would be better for the organization to wait on signing Beniers given they aren't competing for a playoff spot. However, he said that's just the reality that comes with a player the talent level of Beniers.

"The team would certainly prefer not to burn [the year] but that’s part of doing business in today’s world with high draft picks," he said.

After the three-year entry-level deal, Beniers will become a restricted free agent. The outcome is the same whether he gets this season to count as his first year or not, though the price of contract will increase after his first three seasons. Restricted free agency gives the team the ability to match any offer extended to a player from other teams across the league.

NHL players don't become unrestricted free agents until they have accrued seven seasons of service time (40 games per year) or they have reached 27 years old.

The Big Ten Tournament occurs over the next three weekends with Michigan playing a best-of-three series against Michigan State this weekend. NCAA Regionals are March 25-27 and then the Frozen Four ends the college season.

If the Kraken are going to burn Beniers' first year regardless, it would make sense to get as much ice time as possible before the end of the season. If Michigan advances to the finals, the soonest Beniers could join the team would likely be April 12 at Calgary (assuming he signs his rookie contract). However, if the playoff run ends early, Beniers might be headed to Seattle even sooner.

"Matty is with Michigan. That’s where his focus is right now," Francis said. "They’re trying to win a national championship, and we wish all the best for him and his teammates. Once that is complete, then we’ll get into discussions with him and his agents as to future plans, but we’ve certainly been really pleased with what he’s doing."