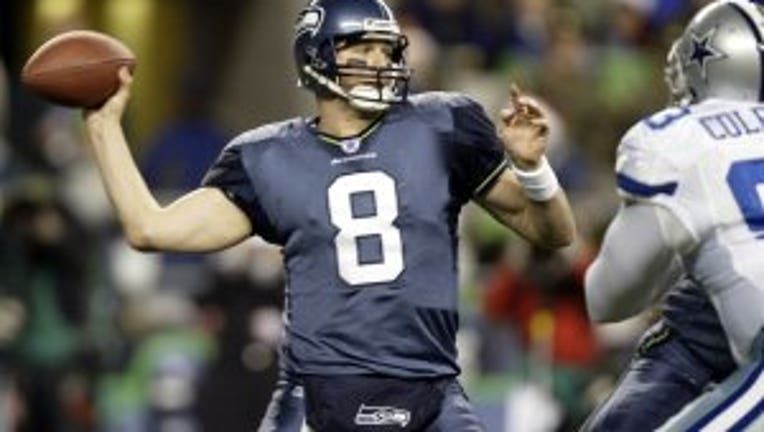 SEATTLE - For reasons even he can’t fully explain, Matt Hasselbeck seems to hold sharper memories of the tougher times during his long tenure in Seattle than the moments when the Seahawks experienced success.

The blazing hot training camps in Eastern Washington. The time he was benched. Some of the painful losses. The tougher moments seem to be the ones that have resonated.

But that also makes Hasselbeck appreciate the successes he had during his 10 years as the quarterback of the Seahawks and moments such as Monday night when he will be inducted into the Seahawks’ Ring of Honor at halftime of Seattle’s matchup with New Orleans.

Hasselbeck’s final home game with Seattle was against the Saints in the 2010 playoffs, and now he’ll become the 13th inductee in franchise history on the night the Seahawks face the same opponent.

"We created something really, really special and in the process of that happening there were some moments, seasons, plays, or games that you will never forget," Hasselbeck said this week.

"It really was an incredible journey and an unlikely one if you were to be in the moment and say that one day it would be us. It would have been hard to imagine, but it makes it that much more special, knowing what’s been accomplished."

Hasselbeck was a mainstay for the Seahawks during most of the 2000s, the hand-picked selection of Mike Holmgren to be Seattle’s quarterback and the engineer of one of the best runs of success in team history.

He helped lead Seattle to five NFC West titles and took the Seahawks to their first Super Bowl appearance in his tenure. And in another moment of synergy Holmgren will become the 14th Ring of Honor member during next week’s game against Jacksonville.

"It meant a lot and to go through that journey with him where it wasn’t always easy, but we weathered the storms, stayed the course, and bought into his message, and we were able to do some special things and set a foundation for future success," Hasselbeck said.

"The fact that he’s going in and I’m going in the same year where I know that could have easily been some other combination of some players and coaches. I’m very grateful."

While Holmgren was the head coach for most of Hasselbeck’s time, his final season was with Pete Carroll in charge. Hasselbeck said he didn’t want to like Carroll’s coaching style, but "I absolutely loved it. I loved playing for Pete."

For his part, Carroll said he was attracted to the Seattle job in 2010 partly because of Hasselbeck’s presence.

"We didn’t win all of our games or anything like that, but we did some great stuff," Carroll said. "We started a relationship that I’m really proud of."

The capper to that one season Hasselbeck and Carroll were together was the Seahawks upset of the defending Super Bowl champion Saints in the NFC wild-card game.

That night will forever be remembered for Marshawn Lynch’s fourth-quarter touchdown run that caused seismic activity. But it was also a terrific performance by Hasselbeck throwing for four touchdowns playing with an injured wrist.

"He made a throw in our playoff game in ’10, I want to say it was third or fourth down. He gets hit as he throws it into a zero blitz," Saints coach Sean Payton said. "It was an impressive throw. It was a critical play in that game."

Even with all that happened that night, the lasting memory for Hasselbeck is his kids being taken down to the field and walking off with their dad after the unexpected victory.

Despite his fond memories for Seattle, Hasselbeck is also an analyst for ESPN in his current profession who sees Monday night as a possible tipping point in the Seahawks season. A win and Seattle would seem to have a chance at getting back to .500 before the bye with a home game next week against Jacksonville.

"I’m just kind of looking at the landscape of the NFC, I still think Seattle can accomplish the goals they set out to have at the start of the year," Hasselbeck said. "They’ve just made it pretty hard on themselves because they dropped a couple games that they didn’t need to drop."