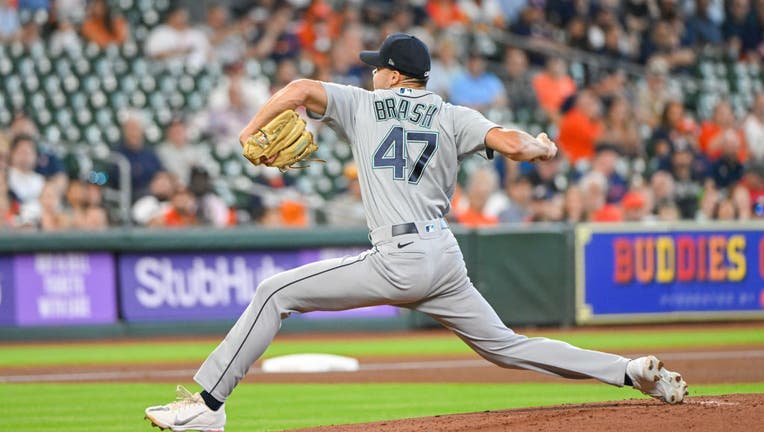 HOUSTON, TX - MAY 04: Seattle Mariners starting pitcher Matt Brash (47) delivers a pitch during the baseball game between the Seattle Mariners and Houston Astros at Minute Maid Park on May 4, 2022 in Houston, TX. (Photo by Ken Murray/Icon Sportswire

SEATTLE - The Seattle Mariners sent rookie right-handed pitcher Matt Brash down to Triple-A Tacoma as part of a handful of roster moves to the pitching staff on Thursday.

Manager Scott Servais said prior to Thursday's game against the Tampa Bay Rays that Brash will also move to the bullpen with the Rainiers.

"We may kind of look at him possibly pitching out of the bullpen and see what that brings," Servais said. "The two-pitch mix, the curveball and the slider, along with the fastball, three pitches, but they're dominant pitches and getting an opportunity to get him on the mound more frequently, a chance to get more work in for him and maybe a chance to impact us in a different role here as we go later into our season."

Brash, 23, struggled in his five starts with the Mariners after breaking camp as a part of the starting rotation. Brash posted a 1-3 record with a 7.65 ERA (17 ER, 20.0 IP) with 17 walks and 19 strikeouts in his five outings with the team. Brash failed to get through more than three innings in either of his last two starts for the team. In those starts, he went five total innings with 10 earned runs.

"I definitely think he's a guy that can help us win games this year," Servais said. "I just think the chance to impact our team is probably greatest if he can assimilate to the bullpen and come out and help us there in multiple days in a week versus just one day in a week."

The Mariners made a similar conversion with Edwin Diaz when Servais and general manager Jerry Dipoto arrived to the team in 2015. Diaz had been a starter in the minor leagues through the 2015 season and made six starts in Double-A in 2016 before being moved to the bullpen. He joined the Mariners bullpen by the end of the season and saved 109 games over three seasons in Seattle, including a league-best 57 in 2018.

Servais said that the move of Brash to the bullpen isn't necessarily a permanent move. However, there is more primacy on winning now for the Mariners and the belief is Brash could be more effective helping this year's team out of the bullpen.

"Last time I checked, we're playing the 2022 season, we're not playing the 2023 season yet," Servais said. "In the past it was a little bit more looking out into the future. How does this guy play and what role does he play for us when we're at a point we're really competing and fighting for a playoff spot, which is, you know, where we hope to be this year. And I think he can help us out of the bullpen there more than he could as a starter. So it's looking at how he can help us this year more than in the future."

Additionally, the Mariners placed reliever Matt Festa was placed on the 15-day injured list, retroactive to May 4, with right elbow tendinitis. Right-handed pitcher Riley O'Brien was recalled from Triple-A Tacoma with left-hander Danny Young added to the 40-man roster and brought up from Tacoma.

Left-handed pitcher Nick Margevicius was designated for assignment to open a roster spot for Young's addition.

Right-handed pitcher Matt Koch also was assigned to Tacoma after clearing waivers. He was designated for assignment last week by the Mariners.

O'Brien and Young are both relievers. The Mariners will need another starter to fill Brash's spot the next time through the rotation. Brash would have made his next start on Monday against the Philadelphia Phillies.

"We've got some ideas. We don't have to make that call today. So we'll do that here in the next few days," Servais said of the Monday starter.

O'Brien, 27, was acquired by Seattle from Cincinnati in exchange for a player to be named later or cash considerations on April 16. He appeared in five games for Triple-A Tacoma this season posting a 1-1 record with a 0.00 ERA (0 ER, 5.2 IP) with three walks and seven strikeouts. He's a Shoreline, Wash. native that played at Shorewood High School.

Young, 27, will make his Major League debut when he first appears in a game. He signed a minor league contract in February and has appeared in nine games for the Rainiers this season, going 0-0 with a save and a 7.00 ERA (7 ER, 9.0 IP) with two walks and 15 strikeouts.