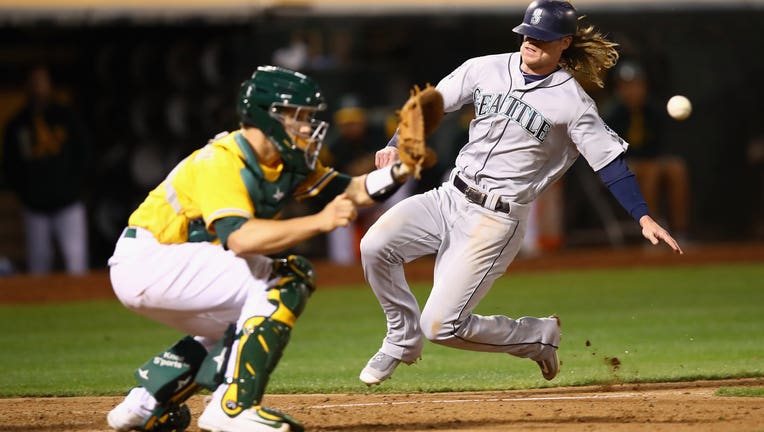 OAKLAND, Calif. (AP) — Leonys Martin homered in the top of the 10th inning as the Seattle Mariners rallied from a four-run deficit to defeat the Oakland Athletics 7-6 on Tuesday night.

His second home run of the season pushed the Mariners' record on their nine-game road trip to 5-3.

Tony Zynch pitched out of a jam in the bottom of the 10th for his second save.

Marc Rzepczynski (2-0) pitched a scoreless inning in the bottom of the ninth.

The A's had runners at first and second with one out but Zynch struck out Chad Pinder swinging and got Matt Chapman to fly out to right.

Smith was the seventh reliever manager Bob Melvin summoned in relief of Kendall Graveman, who was making his second start after being on the disabled list with a strained right shoulder. Graveman gave up four runs (three earned) and seven hits in 5 1/3 innings.

Oakland's gaffe-prone defense figured prominently in the meltdown as they committed three errors that led to two unearned runs.

Gamel was 2 for 5 with a two-run double.

The A's lead the majors with 95 errors and 70 unearned runs allowed.

Seattle was 2-44 when trailing after seven innings going into Tuesday.

Less than two days after being traded to the Mariners, All-Star first baseman Yonder Alonso debuted with his new team in his old digs. "We wish him the best," Melvin said. "He was very impactful with this club not only on the field but in the clubhouse."

The Mariners acquired RHP Ernesto Frieri from the Texas Rangers for cash considerations. Frieri was assigned to Triple-A Tacoma.

Mariners: RHP Felix Hernandez was placed on the DL with right shoulder bursitis. He returned to Seattle and was examined by team physician Dr. Edward Khalfayan. Marco Gonzales will take Hernandez's spot in the rotation. "We certainly need (Hernandez) in our rotation," manager Scott Servais said. ". three to four weeks is a little bit of a blow there." . RHP David Phelps was placed on the DL with an impingement in his right elbow. He's expected to miss two to three weeks.

Athletics: C Josh Phegley (left oblique strain) took swings off a tee on Tuesday. He's been out since July 25. . OF Jake Smolinski (right shoulder surgery) is with the team and will soon go on a rehab assignment as a DH, Melvin said.

RHP Yovani Gallardo (5-7, 5.35 ERA) will pitch Wednesday's series finale against Oakland. He's 2-0 with a 2.12 ERA against Oakland in three appearances including two starts.