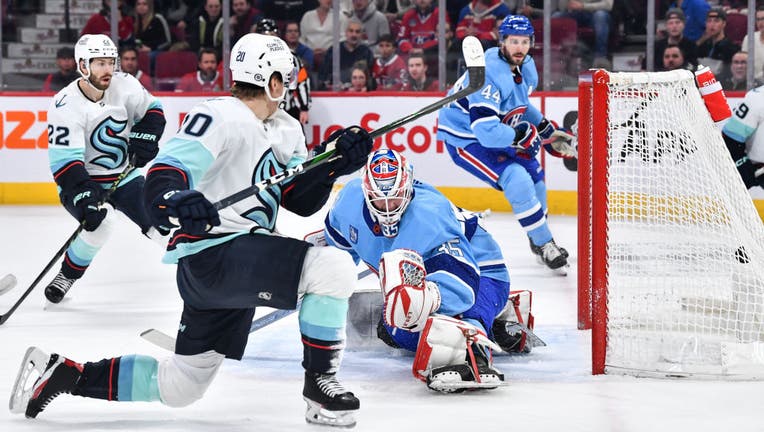 MONTREAL, CANADA - JANUARY 09: Eeli Tolvanen #20 of the Seattle Kraken scores on goaltender Sam Montembeault #35 of the Montreal Canadiens during the first period at Centre Bell on January 9, 2023 in Montreal, Quebec, Canada. (Photo by Minas Panagiot

MONTREAL - Vince Dunn and Eeli Tolvanen each had a goal and an assist, Martin Jones stopped 21 shots for his second shutout of the season as the Seattle Kraken beat the Montreal Canadiens 4-0 on Monday night for their fifth straight win.

Daniel Sprong and Matty Beniers also scored, and Yanni Gourde had two assists in his return to his home province of Quebec. The Kraken have outscored opponents 26-8 during their win streak.

Jones had six saves in the first period, nine in the second and six in the third to get his 27th career shutout.

Samuel Montembeault had 37 saves for Montreal, which snapped a seven-game skid with a 5-4 win against St. Louis on Saturday.

The surging Kraken jumped out of the starting blocks in the first period, outshooting Montreal 19-6 and grabbing a 3-0 lead.

Seattle opened the scoring at 6:54 of the opening period when Dunn found Tolvanen with a cross-ice pass through the slot. The forward got his fifth goal of the season.

Sprong doubled the Kraken’s lead on the power play with a heavy shot from the point just past the midpoint of the period. It was his 13th.

Dunn also fired a slap shot from the point to give Seattle a 3-0 lead with 5:40 remaining in the first.

The Kraken shut down Montreal’s attack, blocking a total of 18 shots. Jones made an impressive pad save on Nick Suzuki with 3:03 remaining in the third to preserve his shutout.

Montreal pulled Montembeault but Beniers sealed Seattle’s win with an empty-netter with 1:03 remaining.

The Canadiens lost a fourth straight game with their reverse retro uniforms, falling to 0-4-0 while getting outscored 18-5 in their light blue jerseys.

The Canadiens announced a few hours before the game that goaltender Jake Allen suffered an upper-body injury. The team recalled Cayden Primeau from Laval of the AHL and he was the backup against the Kraken.

Kraken: At Buffalo on Tuesday night in the fifth of a seven-game trip.

Canadiens: Host Nashville on Thursday night in the finale of a three-game homestand.