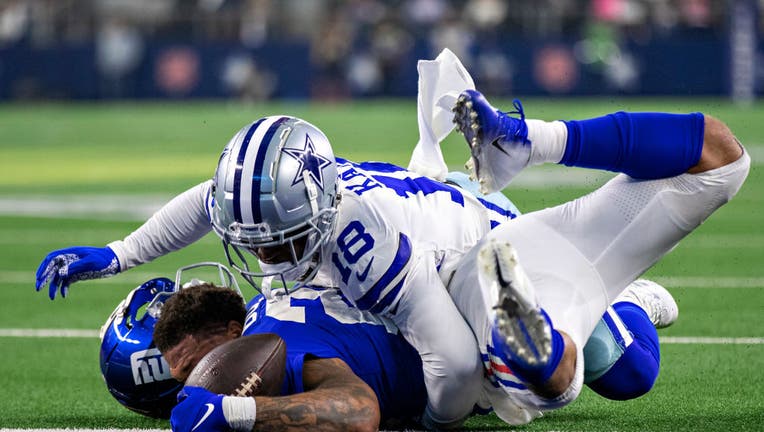 ARLINGTON, TEXAS - OCTOBER 10: Devontae Booker #28 of the New York Giants runs for a touchdown and is tackled by Damontae Kazee #18 of the Dallas Cowboys at AT&amp;T Stadium on October 10, 2021 in Arlington, Texas. The Cowboys defeated the Giants

The visits were reported to the NFL on their official transaction wire.

Addison, 34, is an 11-year NFL veteran that has played for the Chicago Bears, Indianapolis Colts, Washington Commanders, Carolina Panthers and Buffalo Bills. Addison was a role player through the early stages of his career before earning his way into the Panthers starting lineup in 2017. Addison had 29.5 sacks over his last three seasons with Carolina as a starter. He played the last two seasons with the Bills where he had 12 total sacks in two seasons with the team.

Kazee, 28, has spent the last five years playing for the Dallas Cowboys and Atlanta Falcons under the coaching of former Seattle assistant coach Dan Quinn. Kazee spent four years with the Falcons with Quinn as head coach and played for Dallas last year with Quinn as defensive coordinator. He's played in 69 career games with 49 starts. He has 251 career tackles with 12 interceptions. His seven interceptions in 2018 led the NFL.

Kazee was once a commit to play at the University of Washington before eventually playing his college football at San Diego State.