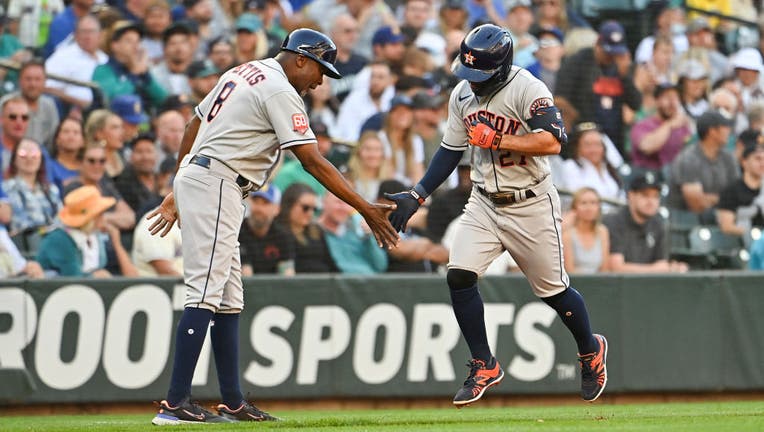 SEATTLE, WASHINGTON - JULY 22: Jose Altuve #27 of the Houston Astros shakes hands with third base coach Gary Pettis #8 after hitting a solo home run during the first inning against the Seattle Mariners at T-Mobile Park on July 22, 2022 in Seattle, Wa

SEATTLE - A trio of solo home runs from Jose Altuve, Yordan Alvarez and Martin Maldonado helped snapped the Seattle Mariners winning streak at 14 games in a 5-2 loss to the Houston Astros in the first game back after the All-Star break on Friday night.

The Mariners won their final 14 straight games entering All-Star week and were one victory shy of matching the 15-game winning streak authored by the 2001 team for the longest run in franchise history.

Instead, the Astros clubbed three homers off starter Marco Gonzales and the Mariners were unable to capitalize on their offensive chances throughout the contest. Seattle left nine runners on base, including the based loaded in the eighth inning, as the offense couldn't deliver the needed hits to drive runs home.

"What a run we've been on," manager Scott Servais said. "I don't think we've lost a game since July 1st. Obviously, you're not going to win every game in this league but tonight, a ton of intensity. I just loved our at-bats throughout the course of the game. We put a ton of pressure on them. We just couldn't quite get the big hit."

The Mariners were playing without All-Star center fielder Julio Rodríguez, who was a late scratch from the lineup just prior to first pitch due to a sore left wrist. Rodríguez's wrist was tender after a hard slide into a base in Texas in the final series before the All-Star break. Then he hit 81 home runs in the Home Run Derby on Monday night and was a bit sore getting to the ballpark on Friday.

"Coming back from there we knew it was a little bit tender, didn't feel great in batting practice. … Didn't know he was going to be a late scratch until he went back in the batting cage around 6:30 (p.m.) and our training staff just felt it wasn't worth the risk running him out there," Servais said.

"We'll see how it is. It's literally day-to-day. … Hopefully he can get back in there tomorrow or the next day. We'll just have to monitor it and see what the training staff says."

Altuve led off the game with his solo shot to quickly put Houston on top. Alvarez led off the fourth inning with a bomb to center and Martin Maldonado homered to left in the fifth to give Houston a 3-0 advantage. Jeremy Peña singled home Altuve to make it a 4-0 game.

Ty France homered in the sixth to get the Mariners on the board. Then a promising eighth inning rally fell short. After Carlos Santana walked to load the bases, Dusty Baker went to reliever Ryne Stanek, who entered the night with MLB's longest active streak without allowing a run at 26 ⅓ innings. Stanek walked Eugenio Suarez to cut the deficit to 5-2, but a soft liner from Kyle Lewis was snared with a leaping grab by Peña at shortstop for the second out of the inning. Had the ball landed into the outfield, at least a run – and likely two – would have scored.

Instead, Stanek struck out Cal Raleigh to end the threat and increase his scoreless streak to 27 innings.

A one out double from Dylan Moore in the ninth inning tried to spark one last surge, but Hector Neris would retire J.P. Crawford and France to pick up his first save of the year.