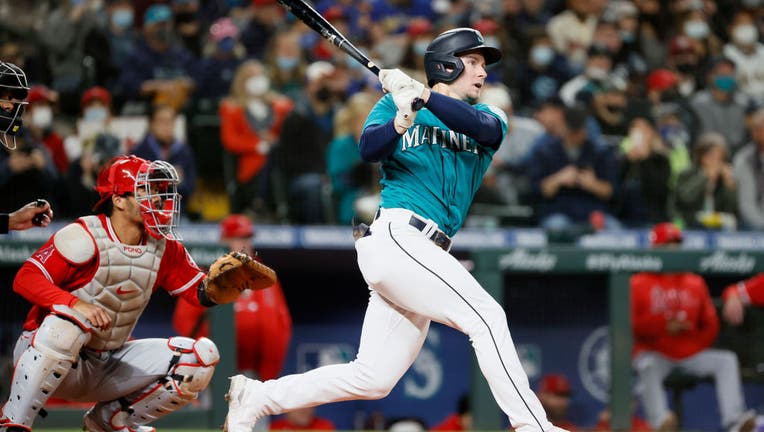 SEATTLE, WASHINGTON - OCTOBER 01: Jarred Kelenic #10 of the Seattle Mariners at bat against the Los Angeles Angels at T-Mobile Park on October 01, 2021 in Seattle, Washington. (Photo by Steph Chambers/Getty Images)

SEATTLE - The M's are taking on the Angels two more times—Saturday night and Sunday afternoon—and tickets are just about gone!

As of 12:30 p.m. Saturday, the Seattle Mariners says Saturday tickets are completely sold out, and scattered single tickets remain for the Sunday game.

Seattle fans are holding out for two much-needed wins, trying to end a 20-year drought since last reaching the postseason. "Believe" has become Seattle’s rallying call, and the Mariners are charging into the final weekend of the regular season with plenty of belief and right in the thick of the AL wild-card race.

Anyone five and older must mask up in the stands unless eating or drinking, and outside food and drink is allowed, as well as one 32 ounce sealed, clear plastic water bottle per person.

PREVIOUS COVERAGE: Seattle Mariners fans 'Believe' in clinching a spot in the playoffs since 2001 season