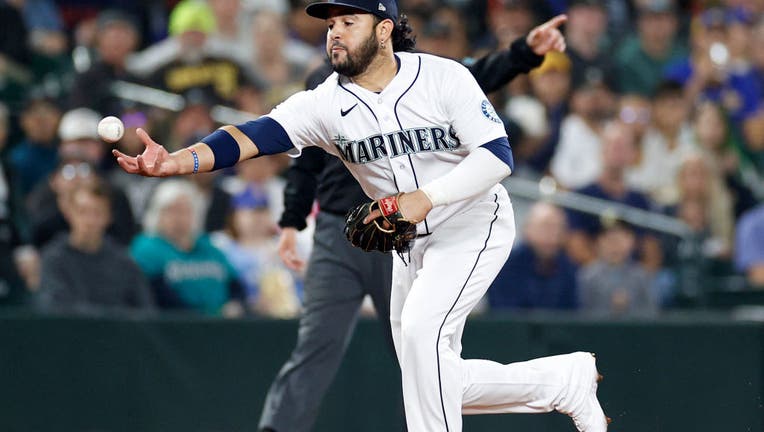 SEATTLE, WASHINGTON - SEPTEMBER 13: Eugenio Suarez #28 of the Seattle Mariners makes a play for an out during the fifth inning against the San Diego Padres at T-Mobile Park on September 13, 2022 in Seattle, Washington. (Photo by Steph Chambers/Getty

The Seattle Mariners placed third baseman Eugenio Suárez on the 10-day injured list on Saturday after he sustained a fractured index finger on his throwing hand in Friday night's loss to the Los Angeles Angels in Anaheim.

Suárez was injured when a ground ball from Luis Rengifo jumped up on him on the final out of the fourth inning. The ball hit Suárez's throwing hand and caused the fracture. The finger swelled in between innings and was obviously painful to Suárez on his at-bat the following inning.

Suárez is traveling to Phoenix to get an evaluation from a hand specialist on Monday. The Mariners are hopeful he will be able to return as a hitter when he's eligible to come off the injured list. However, the larger concern is his ability to throw the baseball.

"The biggest thing is going to be throwing," Servais said. "I think he’ll be able to come back and swing the bat hopefully by the end of the 10 days. But we don’t know when he’s going to be able to feel comfortable throwing. It’s never ideal timing when you lose a key player like that. He has been going so good for us."

Suárez leads the Mariners with 31 homers and had been on a tear in September. Suárez was batting .271 with a double and six homers in 13 games played this month. For the season, Suárez is batting .235 with 84 RBI and an .805 on-base plus slugging percentage.

Suárez has also played a fine third base defensively and been a constant presence in Seattle's lineup. He'd played in 142 of 143 games this season for the Mariners up until Saturday.

Abraham Toro will lead a committee effort to replace Suárez at third base in the meantime as Seattle makes a final playoff push over the next two weeks.

"We’ll use different guys in there at different points. I really hope Abe Toro steps up," Servais said. "He’s gonna get the majority of the reps over there early on. He did so many good things for us last year. This year, it’s been a struggle. He’s had a lot of big hits, but the consistency really hasn’t been there offensively. Hopefully, this helps get him going."