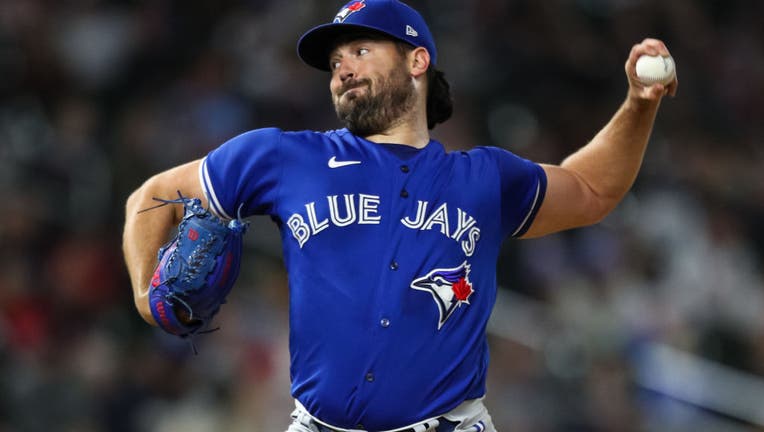 MINNEAPOLIS, MN - SEPTEMBER 25: Robbie Ray #38 of the Toronto Blue Jays delivers a pitch against the Minnesota Twins in the second inning of the game at Target Field on September 25, 2021 in Minneapolis, Minnesota. (Photo by David Berding/Getty Image

Ray is coming off the best season of his career with the Toronto Blue Jays, going 13-7 with a 2.84 ERA and 248 strikeouts in 193 1/3 innings. A left-handed power pitcher, he topped the majors in strikeouts and led the American League in ERA, games started and innings pitched.

He immediately becomes the ace of Seattle’s staff. Marco Gonzales, Chris Flexen and Logan Gilbert are also under contract for 2022 with an ascending Mariners team that went 90-72 last season and barely missed snapping the club’s 20-year playoff drought.

"Adding our league’s reigning Cy Young Award winner is exciting," Mariners president of baseball operations Jerry Dipoto said in a statement. "He’s a high-character person, as well as one of the preeminent strikeout pitchers in the game. Robbie brings real presence to the front of our rotation."

Ray wasn’t even an All-Star in his first full season with the Blue Jays, which speaks to how dominant he was the second half of the year. Beginning with his start on July 11 against Tampa Bay, when he threw seven shutout innings, Ray had a 2.35 ERA and 129 strikeouts in 99 2/3 innings over his final 16 starts. He pitched at least six innings in 12 of the 16 and allowed more than three earned runs only twice.

The Seattle Mariners will induct Ichiro Suzuki into the team’s Hall of Fame.

"I can’t wait to get started here in Seattle. I’m here to win," Ray said. "There’s something special going on here with the team coming off a 90-win season and I’m excited to be a part of it."

The signing of Ray was the second major move of the offseason for Seattle along with trading for All-Star second baseman Adam Frazier from San Diego.

Ray turned down an $18.4 million qualifying offer from Toronto, so the Mariners will forfeit a draft pick as compensation for signing him.