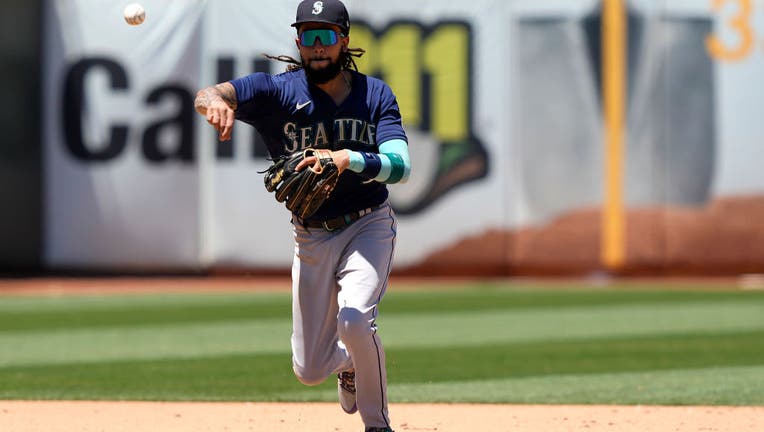 OAKLAND, CALIFORNIA - JUNE 23: J.P. Crawford #3 of the Seattle Mariners throws to first base throwing out Christian Bethancourt #23 of the Oakland Athletics in the bottom of the six inning at RingCentral Coliseum on June 23, 2022 in Oakland, Californ

SEATTLE - Seattle Mariners shortstop J.P. Crawford will begin serving a four-game suspension tonight for his role in a brawl against the Los Angeles Angels last Sunday.

Crawford will miss all four games of this weekend's series against the Oakland Athletics. His suspension was reduced from five games to four upon appeal. Crawford confirmed the reduced suspension after early batting practice on Thursday.

Left fielder Jesse Winker and center fielder Julio Rodríguez are still awaiting word on the appeals of their suspensions. Winker was initially suspended seven games while Rodríguez was suspended for two.

"Certainly unfortunate for us," manager Scott Servais said. "Everybody knows what he does leading off and playing shortstop but we will abide by the rules and the rulings that are out there. So we'll start with that one today. And then after that, sometime shortly after, Jesse Winker will serve his suspension. So they're not going to be doubled up at all."

The Mariners will not be able to replace suspended players on the roster during their absences. They will have to play with just 25 players during Crawford's absence. However, MLB is allowing the team to have the suspensions run consecutively so they aren't missing multiple players on a given night.

Crawford will continue to take batting practice at the stadium and go through pregame activities before leaving the park to watch the games from home.

Dylan Moore will play shortstop during Crawford's absence. If something were to happen to Moore, then Servais would need to turn to another option.

Crawford and Winker were both suspended for fighting in the brawl against the Angels. Both players threw punches at Angels reliever Ryan Tepera after Anthony Rendon shoved Winker in the face. Winker had confronted the Angels dugout after getting hit by pitcher Andrew Wantz in the second inning of Sunday's 2-1 loss in Anaheim.

Rodríguez said he was told his suspension was for throwing a punch as well, though he insists he didn't. He said pregame on Thursday he has yet to hear about his appeal status.

– Catcher Tom Murphy had surgery on Wednesday in Texas to fix his injured left shoulder. Murphy suffered a dislocated shoulder in a game against the Tampa Bay Rays on May 6. He will do rehab work in Seattle with the expectation that he will be ready in time for spring training next year. Murphy was transferred to the 60-day injured list on Wednesday.

– Outfielder/designated hitter Kyle Lewis is closing in on a rehab assignment. Lewis took early batting practice and ran the bases again on Thursday as he continues to ramp up his workload. Lewis suffered a concussion when a pitch from Houston Astros reliever José Urquidy caught him in the jaw on May 28.

Lewis experienced a wide array of concussion symptoms in the aftermath of the injury and said he had to essentially remain in a bed for a week afterward. He's been taking early batting practice and running throughout the week.