Fans waited outside T-Mobile Park hours before the game started on Friday. This is the first time in two years that fans will be allowed to Mariners games without any type of COVID restrictions

SEATTLE - The Seattle Mariners make their return to T-Mobile Park for their home opener against the Houston Astros on Jackie Robinson Day across Major League Baseball.

The Mariners return from their opening road trip in Minnesota and Chicago with a 3-4 record after a 5-1 victory against the White Sox snapped a four-game losing skid on Thursday.

"I'm really excited about our team," manager Scott Servais said. "Spending a short spring training with the guys, you had a pretty good vibe right away with the new guys that have come into the ball club. They fit in really well. Every team kind of takes on its own identity, your own personality and we're finding out about a lot of guys right now. I like the make up of the room. These guys work hard, they prepare really diligently and it's going to be fun to see how the season plays out."

Due to the extended lockout between the league and the MLBPA this offseason before a new CBA was reached, the regular season was delayed a week. It means that the Mariners home opener now coincides with the day Robinson made his debut with the Brooklyn Dodgers in 1947. The day has become an annual celebration of Robinson's breaking of the color barrier in baseball.

As it is Jackie Robinson Day, all players for both teams will wear Robinson's No. 42.

Marco Gonzales will get the start for the Mariners against right-hander pitcher Jake Odorizzi for the Astros. Gonzales (0-1, 9.00 ERA) had a rough debut for Seattle against the Twins on Sunday. He allowed six runs, though only two were earned, in just two innings of work. He also allowed three home runs.

Odorizzi allowed two runs in four innings pitched in a 13-6 win over the Los Angeles Angels.

Julio Rodríguez is also set to make his home debut after breaking camp with the major league club.

The Mariners finished last season with three straight sellouts with the team in the playoff chase. Tonight's game is a sellout as well for Opening Day. Servais and the Mariners are eager to kick off the home schedule in front of a full building.

"It's the way it should be," Servais said. "It's the major leagues. We've got one guy who is going to experience it for the first time tonight in Julio. This is what you dream about. And I joke with players there's only one time that I really miss playing and that's Opening Day. You get the butterflies, you get excitement. It's a fresh start. It's early in the season. There's typically a little nip in the air so to speak and it's what baseball should be. Everybody is excited. Kids are watching it, adults, grandparents, everybody is following the team and that's what makes it fun." 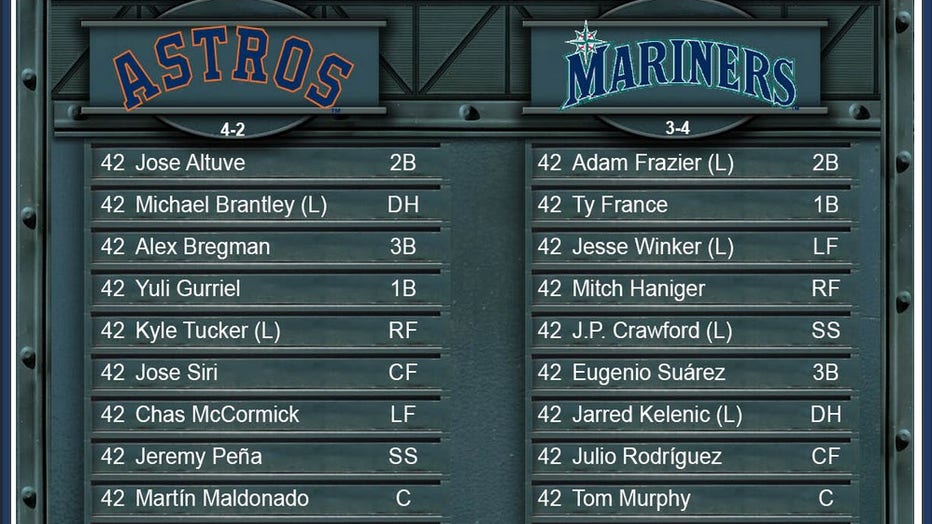