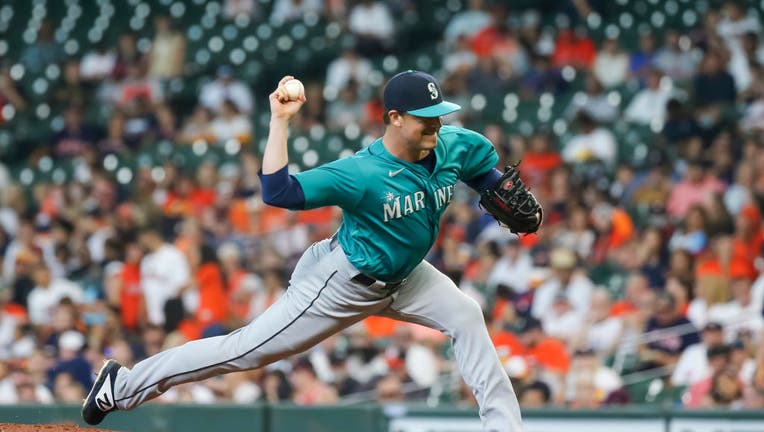 HOUSTON, TX - AUGUST 22: Seattle Mariners relief pitcher Joe Smith (43) takes over the mound in the bottom of the sixth inning during the baseball game between the Seattle Mariners and Houston Astros on August 22, 2021 at Minute Maid Park in Houston,

HOUSTON - A late rally on Sunday helped the Seattle Mariners leave Houston on a high note after two terrible games to start the series against the Astros.

Ty France tied the game with a solo home run in the ninth inning and put the Mariners on top with an RBI single in the 11th before Kyle Seager belted a three-run homer in a 6-3 win.

J.P. Crawford started the 11th on second base and moved to third on a wild pitch by Ryne Stanek (1-3) with no outs. Mitch Haniger walked before France singled on a grounder to right field to put Seattle up 3-2.

Seager then connected on his 29th home run this season to extend the lead to 6-2.

"That was a fun ball game to win," manager Scott Servais said.

It was a much-needed victory after his team’s performance in the two other games this weekend.

Houston outscored the Mariners by a combined 27-4 in those games, but had trouble stringing together hits on Sunday. The Astros were up 2-0 before Crawford’s RBI double in the eighth got Seattle within one. France made it 2-2 with his shot in the ninth.

"We have tough losses, and it looks like we’re going to fall off the edge of a cliff," Servais said. "But this team just comes back every day for work. We don’t look backward. We look forward instead of looking at what happened before. And that’s what we did today."

Houston tried to rally in the 11th off Seattle reliever Keynan Middleton. Jake Meyers hit an RBI single with one out, Taylor Jones followed with another single and Jacob Wilson walked to load the bases.

Yohan Ramirez replaced Middleton and struck out Jose Altuve and retired Michael Brantley to end the threat and get his first save.

Altuve singled off Paul Sewald (8-3) with no outs in the 10th before the Mariners intentionally walked Brantley to load the bases. But Sewald struck out Carlos Correa, pinch-hitter Jason Castro and Yuli Gurriel to escape the jam.

"I had to pitch like every pitch was the last pitch of the game because it really was," Sewald said. "I had to go for punch outs only."

The Astros lamented missed opportunities after going 3 for 16 with runners in scoring position.

"We should have scored a lot more runs than we did," manager Dusty Baker said. "We had a number of chances and we just didn’t get it done."

Houston’s Yordan Alvarez hit a solo homer off Tyler Anderson in a two-run second to give him homers in three consecutive games for the first time in his career. But the Astros didn’t score again until the RBI single by Meyers in the 11th.

Kendall Graveman, who was acquired from the Mariners in a trade on July 27, took over for the eighth and allowed a double by pinch-hitter Jake Bauers with two outs. Crawford followed with his double.

Ryan Pressly came in for the ninth and was greeted by France’s homer, which was his 15th of the season.

Mariners: RHP Diego Castillo, who was placed on the injured list with right shoulder inflammation on Saturday, had an MRI which showed no damage. The team hopes that means his stint on the disabled list won’t be an extended one. ... Seattle signed RHP Matt Andriese to a major league contract and designated RHP Robert Duggar for assignment.

Astros: RHP Jose Urquidy (right shoulder discomfort) is scheduled to pitch the first of two games of a rehabilitation assignment at Triple-A Sugar Land on Tuesday. If those go well, he is expected to be activated on Sept. 1. ... OF Chas McCormick was out of the lineup for a second straight game on Sunday with soreness in his left hand.

The Mariners improved to 12-4 this season in extra-inning games.