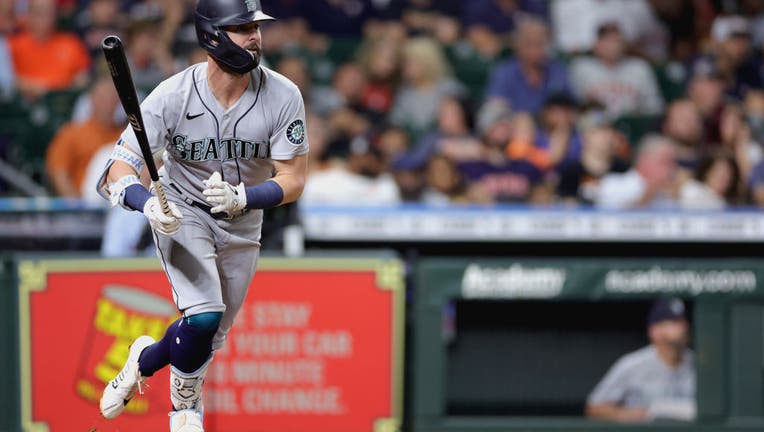 HOUSTON, TEXAS - JUNE 06: Jesse Winker #27 of the Seattle Mariners singles during the fourth inning against the Houston Astros at Minute Maid Park on June 06, 2022 in Houston, Texas. (Photo by Carmen Mandato/Getty Images)

SEATTLE - The Seattle Mariners signed outfielder Jesse Winker to a two-year contract on Thursday that will run through the end of the 2023 season.

The contract carries through the final two arbitration seasons for Winker before he is set to reach free agency.

Per Robert Murray of FanSided.com, the deal is worth a total of $14.5 million. Arbitration is typically completed before the season begins. However, with the MLB lockout extending into March, the typical offseason calendar was thrown out of whack with the arbitration process extending into the season.

Winker, 28, has appeared in 61 games this season for the Mariners after being acquired along with third baseman Eugenio Suárez from the Cincinnati Reds in March. Winker is batting .214 with 19 runs scored, nine doubles, four home runs, 24 RBI and 38 walks this season. His 38 walks leads the American League.

Winker has struggled this season during his first season with the Mariners. Manager Scott Servais was asked if Winker having his contract secured through next season might get him to settle in and turn a corner.

"Different guys handle those things differently. Some guys don't worry about them at all, other guys think about it non-stop," manager Scott Servais said. "So hopefully it does relax him a little bit. I know I've talked to him recently about getting back to using the whole field to hit. Wink's got a little bit too much pull in his game here the first couple of months of the season and that's not really who he is. He uses the whole field. I thought yesterday was a good indication of that."

Via Daniel Kramer of MLB.com, Winker wouldn't use that as an excuse but did say it's good to have it behind him.

"I don't want to say I was really thinking about it a lot," Winker said. "But I think no matter what you kind of are, it’s somewhere in your mind. So it's nice not to have to think about it anymore, and I really enjoy it here and this is where I want to be, so I'm excited about that."

The Mariners also made an addition to their roster by claiming infielder Drew Ellis off waivers from the Arizona Diamondbacks.

To clear a roster spot, outfielder Mitch Haniger was transferred to the 60-day injured list.

Ellis, 26, will join Triple-A Tacoma. Ellis has appeared in 34 career games across two seasons with the Diamondbacks. He's appeared in 42 games with Triple-A Reno this season, batting .217 with 27 runs, 12 doubles, four home runs, 28 RBI and 33 walks.

Ellis was designated for assignment by Arizona on June 12.

Haniger, 31, was placed on the 10-day Injured List on April 30 after sustaining a high-ankle sprain in a game against the Miami Marlins on April 29.

"He's swinging some in the cage. Obviously hasn't been out in the field here yet. So we're still a little ways away," Servais said of Haniger's recovery.