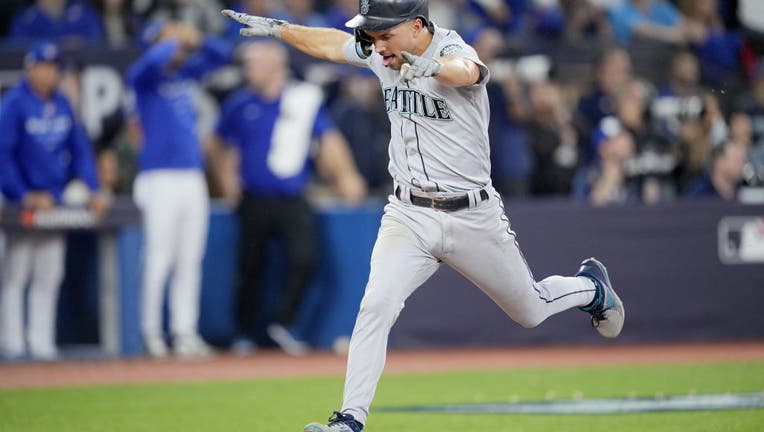 TORONTO, ONTARIO - OCTOBER 08: Adam Frazier #26 of the Seattle Mariners celebrates after scoring on a double hit by J.P. Crawford #3 against the Toronto Blue Jays during the eighth inning in game two of the American League Wild Card Series at Rogers

Adam Frazier's two-out double in the ninth inning capped a wild rally from a seven-run deficit to lift the Seattle Mariners to a 10-9 victory over the Toronto Blue Jays to advance to the AL Division Series.

The Mariners trailed 8-1 after the fifth inning as it appeared the series would extend into a deciding game on Sunday. But the Mariners would get four runs back in the top of the sixth inning behind a three-run homer from Carlos Santana and a two-out bases loaded double from J.P. Crawford in the eighth inning tied the game at 9-9.

Cal Raleigh doubled against Blue Jays closer Jordan Romano in the ninth inning and Frazier's double into the right field corner gave Seattle their first lead of the game. Rookie George Kirby – a starter all season for Seattle – came in and closed out the victory for Seattle to send them to the ALDS against the Houston Astros.

"It's tough to come back in the playoffs against that team in this building," manager Scott Servais said. "We were up against it, but credit to our players. We don't quit. We haven't quit all year. There's a certain resolve that our group has, they just believe in each other.

Frazier's double is the first go-ahead double in the ninth inning or later in the postseason since Edgar Martinez did it 27 years ago today to score Joey Cora and Ken Griffey Jr. in the 11th inning to give Seattle a 6-5 victory over the New York Yankees in their iconic Game 5 victory in the 1995 ALDS.

"I'm just glad the ball fell. It's been a rough year with some luck," Frazier said. "Just trying to put a good swing on one, and I'm glad I could.

"Those are the kind of moments you picture yourself in in the backyard when you're a kid. So try to get something over the plate and put a good swing on one, and I'm glad it came through."

It's the largest postseason comeback in franchise history, tied for the second-largest comeback in MLB playoff history, and the largest in a series-clinching game. Only the 1929 Philadelphia Athletics' comeback from an 8-0 deficit for a 10-8 win over the Chicago Cubs in Game 4 of the World Series was larger.

The Mariners may not make the postseason often, but boy do they come up with iconic moments when they do.

The offensive rally helped bail out a disappointing start from Robbie Ray, who signed with Seattle this offseason after a Cy Young campaign with the Blue Jays a year ago.

As Kirk did the inning before, Santiago Espinal doubled to lead off the third. Vladimir Guerrero Jr.'s two-out double scored Espinal as Toronto's lead grew to three.

Hernández then launched his second homer of the game off Ray to lead off the fourth and chase the Seattle starter from the game. Ray allowed four runs on six hits with four strikeouts on 56 pitches. The Blue Jays put 10 balls in play against Ray with six coming with exit velocities of at least 100 miles per hour. Five of those six went for hits for Toronto.

Ray had been struggling in recent start for Seattle entering the postseason. Over his final five starts of the year, Ray had an 0-4 record with 16 earned runs allowed in 27 ⅓ innings of work. He'd allowed at least six hits in four of his five starts and at least four runs in three of the five starts. Ray had a 5.27 ERA over that span for Seattle.

Meanwhile, Gausman was mowing down the Mariners. Seattle didn't get their first hit until the fifth inning as his deadly splitter kept inducing swings and misses from the Mariner hitters. Adam Frazier's single snapped a run of 10 straight retired by Gausman. Carlos Santana then came inches shy of a home run with a ball that hit the top of the wall in right field and stayed in play for a double. Jarred Kelenic's sacrifice fly allowed Frazier to score to get Seattle on the board and cut the lead to 4-1.

But after a clean inning from Matt Brash once he relieved Ray in the fourth inning, things unraveled quickly on Paul Sewald. Espinal singled and Bo Bichette doubled to put runners at second and third with one out. Guerrero was intentionally walked to load the bases before a passed ball went to the backstop to allow Espinal to score to make it a 5-1 Toronto lead.

Alejandro Kirk walked and Sewald then hit Hernandez to score Bichette. A Matt Chapman sacrifice fly to center field allowed Guerrero to score and Danny Jansen doubled to right to score Kirk as the Toronto lead ballooned to 8-1.

Seattle managed to hit back against Gausman after the long wait between innings as Toronto's offense was rolling. Ty France, Eugenio Suárez and Cal Raleigh all singled to load the bases in the sixth. Gausman got Mitch Haniger to strikeout and Frazier to pop out to first before Blue Jays manager John Schneider decided to go to left-handed reliever Tim Mayza to face Santana.

Mayza spiked his first pitch into the dirt for a wild pitch that allowed France to score. Santana then launched a three-run homer to left field to cut the Toronto lead to 8-5.

It tainted an otherwise terrific outing for Gausman, who finished with four runs allowed on five hits with a lone walk and seven strikeouts for Toronto.

"Gausman was on top of his game tonight, no question," Servais said. "We knew it was going to be tough coming in with all the splits he throws. Our hitters can't identify it. It looks just like his fastball. It's dropping off the table. He had a really good fastball tonight on top of that. When we got him out of the game, it kind of shifted when Carlos came through with the big home run."

Danny Jansen's RBI single in the seventh scored Hernández to push the lead to 9-5.

Suárez doubled off Anthony Bass and Raleigh singled to drive him in to cut the lead down to three again. Haniger singled to chase Bass as Toronto went to closer Jordan Romano to try for the final six outs.

Frazier singled to load the bases but Romano got Santana and Dylan Moore to strike out as he moved on the verge of getting out of the jam. However, J.P. Crawford's jammed liner to center dropped to the turf as Bichette and center fielder George Springer collided hard in shallow center. All three baserunners scored as Crawford's double tied the game at 9-9.

"What's going through my head was I was praying to the baseball gods to just let that ball sit running to first base," Crawford said.

Springer's head dove straight into Bichette's elbow and he was forced to exit the game.

France struck out after Julio Rodríguez was intentionally walked to keep the game tied and send it to the ninth inning to set the plate for Frazier's heroics.

Game 1 of the ALDS against the Astros will be in Houston on Tuesday. Games 3 and 4 (if necessary) will be in Seattle at T-Mobile Park next Saturday and Sunday. In avoiding a third game against Toronto, Logan Gilbert will be the probable starter for the Mariners in Game 1 against Houston against ace Justin Verlander.

"Certainly have a ton of respect for the Astros," Servais said. "They have been there. We have not, but I do know to go to the World Series you have to go through Houston. Just where it's at. We've played some crazy games down there. They had our number for a few years. We played a little bit better at times this year.

"They're really good. We understand that. We're really good. I think you respect everybody in the game. I certainly do. I know how hard it is, but our club fears no one. I truly believe that."