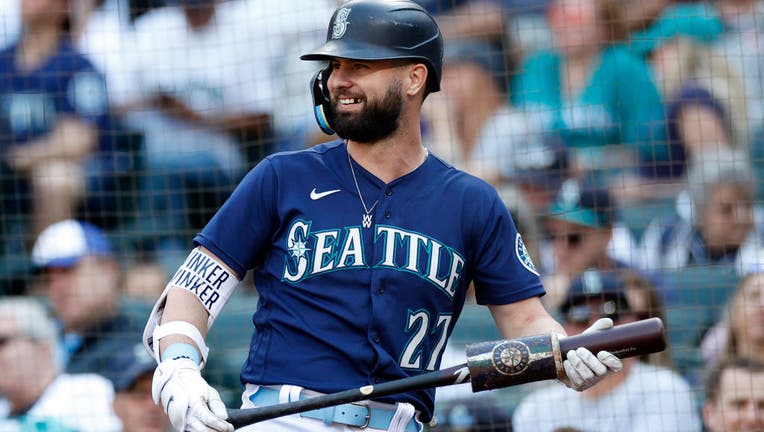 SEATTLE, WASHINGTON - OCTOBER 01: Jesse Winker #27 of the Seattle Mariners looks on during the second inning against the Oakland Athletics at T-Mobile Park on October 01, 2022 in Seattle, Washington. (Photo by Steph Chambers/Getty Images)

SEATTLE - The Seattle Mariners placed outfielder Jesse Winker on the 10-day injured list ahead of the team's regular season finale against the Detroit Tigers on Wednesday.

Winker hasn't played since Sunday's 10-3 loss against the Oakland Athletics. He was scratched from the lineup on Monday with a neck injury that led Sam Haggerty to play instead against the Tigers. Haggerty was then injured in a stolen base attempt in the ninth injury and will miss the postseason with a groin injury.

"The issue with his neck is not going to allow him to get out and play and it looks like it's going to be an issue going forward," manager Scott Servais said.

"He had an issue that was going on. It came up here about 3-4 days ago. Was hoping it was going to calm down and get him in there yesterday in one of the games. … He did have an MRI this morning and there is an issue there, a disc issue in the back of his neck. Hope it's nothing too serious but it's there and we need to have a healthy team. You've got to have guys that can go out and play."

Outfielder Taylor Trammell has been called up from Triple-A Tacoma to take Winker's spot on the roster.

Winker was in danger of being left off the team's playoff roster anyway. His first season in Seattle after a trade from the Cincinnati Reds this offseason has been a disaster. After batting .305 with 24 home runs and a .949 on-base-plus-slugging percentage (OPS) last year with the Reds, he's batting just .219 with a .688 OPS this season for the Mariners.

On top of his struggles at the plate, he is one of the worst defensive players at any position in all of Major League Baseball. Per Fielding Bible, Winker has -16 runs saved this year in left field, which is the sixth worst mark in all of baseball.

Put that all together and Winker's value to a playoff roster was minimal. Trammell, Jarred Kelenic, Dylan Moore (and Haggerty pre-injury) give better speed and defensive potential and any difference with the offensive potential is negligible.

But that decision is now out of the Mariners' hands as Winker isn't healthy enough to perform either way.

Trammell takes Kelenic's place in the lineup for the regular season finale. Kelenic was hit by a pitch in the first game of yesterday's double-header. Kelenic is available as a substitution option for Wednesday's finale, if needed.