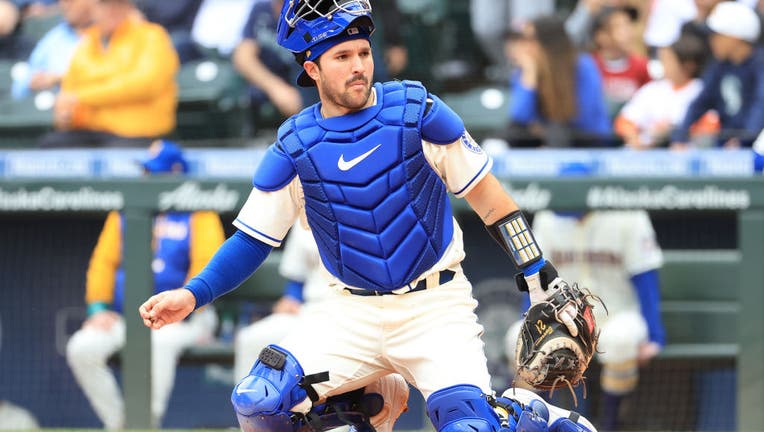 SEATTLE, WASHINGTON - JUNE 12: Luis Torrens #22 of the Seattle Mariners looks on against the Boston Red Sox during the sixth inning at T-Mobile Park on June 12, 2022 in Seattle, Washington. (Photo by Abbie Parr/Getty Images)

SEATTLE - The Seattle Mariners placed catcher Luis Torrens on the 10-day injured list due to a left shoulder inflammation sustained in Sunday's brawl with the Los Angeles Angels. Andrew Knapp was added from Triple-A Tacoma to fill Torrens' spot on the roster.

Torrens, 26, has appeared in 36 games for the Mariners this season. He's batting .222 with two doubles, eight walks and eight RBI and eight runs scored. He's played 24 games behind the plate with the remaining appearances coming at designated hitter and a lone late inning stint at second base in a blowout win on May 31 over the Baltimore Orioles.

Knapp, 30, has played in 22 games for the Rainiers this season. He signed a minor league deal with Seattle on May 21 after being released by the Pittsburgh Pirates. Knapp is batting .198 with seven doubles, four home runs, four walks and 11 RBI with eight runs scored during his time with Tacoma.

"Andrew's got some big league experience," Servais said. "He was in Tacoma so he will be here to work with Cal [Raleigh] behind the plate and do some other things there."

Knapp was a second-round pick of the Philadelphia Phillies in the 2013 MLB First-Year Player Draft out of the University of California-Berkeley. He's played in 320 career games over six seasons with the Phillies (2017-21) and Pittsburgh (2022). Knapp is a career .210 hitter with 31 doubles, four triples, 13 home runs, 101 walks and 64 RBI.

Knapp had to be added to the 40-man roster to join the major league club. He fills the final open roster spot on the 40-man for Seattle.