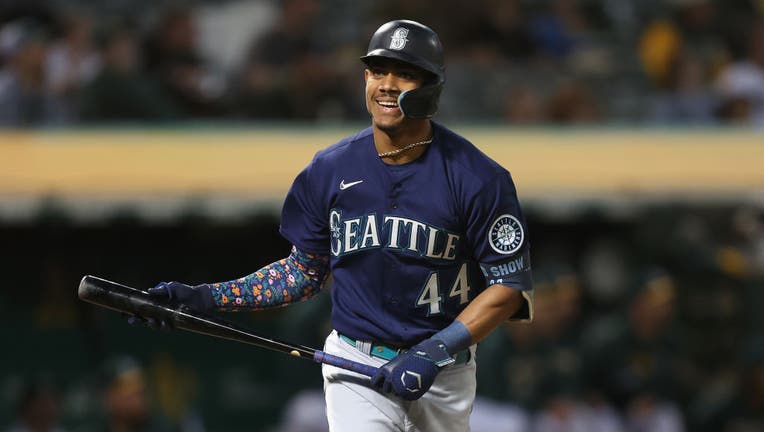 The Seattle Mariners have placed center fielder Julio Rodríguez on the 10-day injured list due to a lower back strain that forced him out of Thursday's game against the Oakland Athletics.

Outfielder Taylor Trammell has been recalled from Triple-A Tacoma to fill the opening on the roster.

Rodríguez had just one at-bat in the 9-5 victory over Oakland before leaving the game from the field in the bottom of the first inning. Rodríguez had an MRI done Friday in Kansas City as the Mariners get set to begin a three-game series with the Royals.

Rodríguez missed three games of the current road trip against the Los Angeles Angels due to lower back tightness. He returned to the lineup in Oakland only to be forced out of Friday's game again.

He will be eligible to return to the roster on Oct. 3 ahead of the Team's final four-game series with the Detroit Tigers.

Jarred Kelenic, who hit a home run and double on Friday in his first game back with the Mariners after a stint with the Tacoma Rainiers, will be the everyday center fielder in Rodríguez's absence.

"Jarred got off to a great start yesterday. He had a really good game," manager Scott Servais said told reporters in Kansas City. "That’s what I was hoping for. Get some confidence going and see if he can take it and run with it. He’s going to play. … I was anticipating his reps would come in the corner, but with Julio out now he’ll be playing in center field. And we’re going to let him run with it."

Rodríguez is batting .280 with 81 runs scored, 24 doubles, three triples, 27 home runs and 73 RBI over 129 games played during his rookie season. Rodríguez became just the third rookie in MLB history to record a 25-home run, 25-stolen base season and first player to reach that milestone in their first season of play. It took him just 125 career games to reach the 25-homer, 25-steal mark, beating out Mike Trout of the Angels, who took 128 games.

Trammell has appeared in 41 games with the Mariners this season, batting .208 with 15 runs scored, nine doubles, four home runs and 10 RBI.