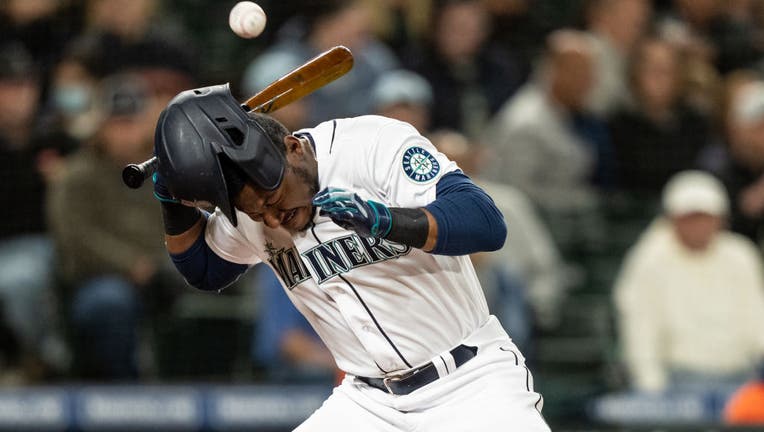 SEATTLE, WA - MAY 28: Kyle Lewis #1 of the Seattle Mariners is hit in the head by a pitch from starter Jose Urquidy #65 of the Houston Astros during the fifth inning of a game at T-Mobile Park on May 28, 2022 in Seattle, Washington. (Photo by Stephen

Seattle Mariners designated hitter/outfielder Kyle Lewis was placed on the 7-day concussion injured list on Wednesday after a pitch from Houston Astros starter Jose Urquidy hit him in the head on Saturday.

The move is retroactive to May 29, meaning Lewis will be eligible to return to the roster June 5.

The Mariners activated infielder Abraham Toro from the 10-day injured list to fill Lewis' roster spot. He had been out due to a left shoulder sprain and made a rehab appearance this week with High-A Everett.

Lewis has appeared in four games since coming off the injured list for ongoing knee issues. He has four hits in 15 at-bats (.267 average) with a home run, a walk and a strikeout. Lewis has exclusively been a designated hitter since his return to the team.

The pitch from Urquidy caught a bit of Lewis' shoulder before continued into the side of his head. His helmet came off as he moved to duck away from the pitch and the ball caught him flush.

Toro left a May 21 game against the Boston Red Sox after a collision with Adam Frazier while attempting to catch a fly ball injured his shoulder.