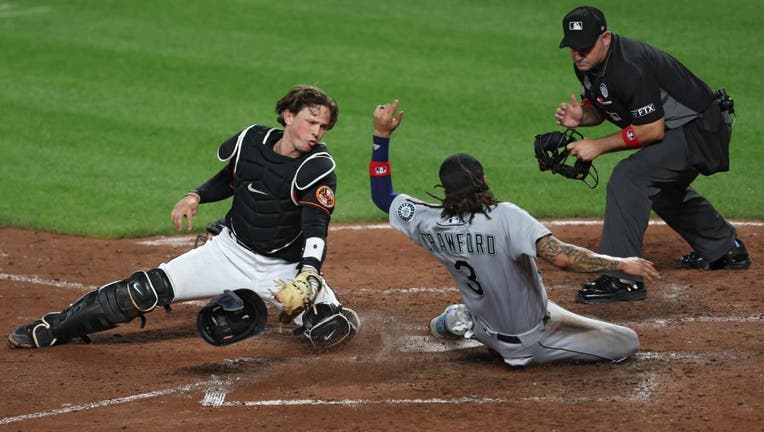 BALTIMORE, MARYLAND - JUNE 02: J.P. Crawford #3 of the Seattle Mariners scores a run in front of catcher Adley Rutschman #35 of the Baltimore Orioles during the sixth inning at Oriole Park at Camden Yards on June 02, 2022 in Baltimore, Maryland. (Pho

BALTIMORE - On a night of baserunning mishaps and blown leads, Diego Castillo looked calm as could be in closing out the win for Seattle.

Abraham Toro hit a tiebreaking triple in the top of the 10th inning, and Castillo shut down Baltimore in the bottom half to lift the Mariners to a 7-6 victory over the Orioles on Thursday night. Castillo retired all six of his hitters and didn’t seem at all rattled by the fact that the tying run was automatically put on second in the 10th.

"My mind was the same," Castillo said. "Just take out every hitter I face, and just finish the game."

With Seattle’s automatic runner on third and one out, Toro hit a drive to deep center field off Jorge López (3-3). Cedric Mullins ran it down at the wall but couldn’t hold onto the ball. Toro sped around to third, but then López retired Luis Torrens and Jesse Winker — both of whom had three hits on the night — to limit the Mariners to a run.

Castillo (2-0) made it hold up, striking out Austin Hays and Ryan Mountcastle before rookie Adley Rutschman hit a line drive into the Mariners’ defensive shift.

"It’s as sharp is we’ve seen Diego in a long time," Seattle manager Scott Servais said. "His confidence is back."

The Orioles led 3-2 before a wild sixth inning that included seven runs and five pitching changes. Eugenio Suárez tied the game with an RBI single, chasing Baltimore starter Jordan Lyles. Adam Frazier followed with a sacrifice fly off Cionel Pérez, and after two walks loaded the bases, Joey Krehbiel came on and allowed a two-run single by Torrens that made it 6-3.

The Orioles struck back when Ramón Urías hit an RBI double and Mullins tied it at 6 with a two-run double down the left-field line.

"That’s a really scrappy team over there," Servais said. "They do not quit, and they’ve got some young guys trying to prove themselves, so we had our hands full."

Hays opened the scoring for Baltimore with an RBI single in the first, and Mountcastle followed with a run-scoring double. Seattle tied it in the third when Winker hit an RBI single and Torrens later scored on a throwing error by Rutschman, the Baltimore catcher.

Hays hit a run-scoring single in the third to make it 3-2.

The time of game was four hours — not what the Mariners needed when they have to be in Texas for a game Friday night.

"I was expecting a rain delay at some point, on top of it," Servais said. "It’s always better when you win the game, I do know that."

Orioles: Baltimore GM Mike Elias announced before the game that top pitching prospect Grayson Rodriguez has a strained lat muscle. ... Krehbiel left the game after just two batters in the sixth because of right shoulder discomfort.

The Mariners begin a three-game series at Texas on Friday night. Logan Gilbert (5-2) starts for Seattle against Dane Dunning (1-3).

Baltimore starts a home series against Cleveland. Bruce Zimmermann (2-3) takes the mound for the Orioles against Shane Bieber (2-3).