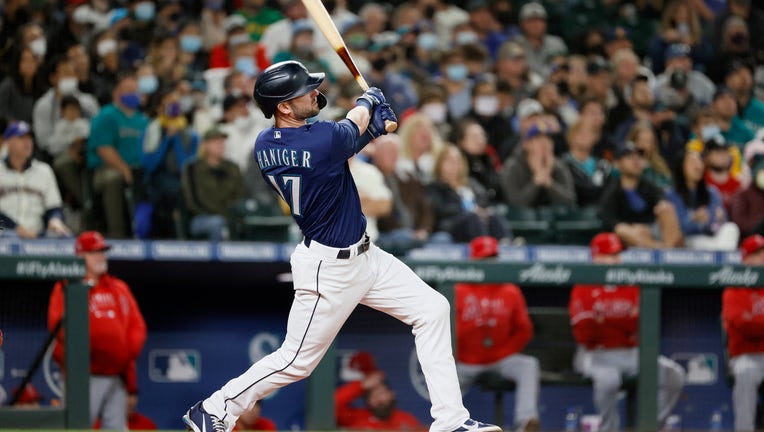 SEATTLE, WASHINGTON - OCTOBER 02: Mitch Haniger #17 of the Seattle Mariners watches his two run home run during the fifth inning against the Los Angeles Angels at T-Mobile Park on October 02, 2021 in Seattle, Washington. (Photo by Steph Chambers/Gett

According to Seattle Mariners Manager Scott Servais, Haniger will be on the injured list for a minimum of five days. Before he returns, he will have to take another COVID test and show no symptoms.

According to The Seattle Times, Haniger was feeling symptoms after the Mariners' 11-1 win in Friday's home opener. Despite feeling sick, he still managed to get on base twice with two hits. He took a take home COVID test Saturday morning, and took a second test later at T-Mobile Park. Both coming back positive.

The Mariners recalled infielder Donovan Walton from Tacoma's Triple-A team to replace Haniger's spot on the roster. Walton will serve as a back-up utility player. Servais is expected to announce the official roster move closer to game time Saturday evening.

The home opener at T-Mobile Park was the first time in two years that Ms fans could enjoy a game without any COVID restrictions.