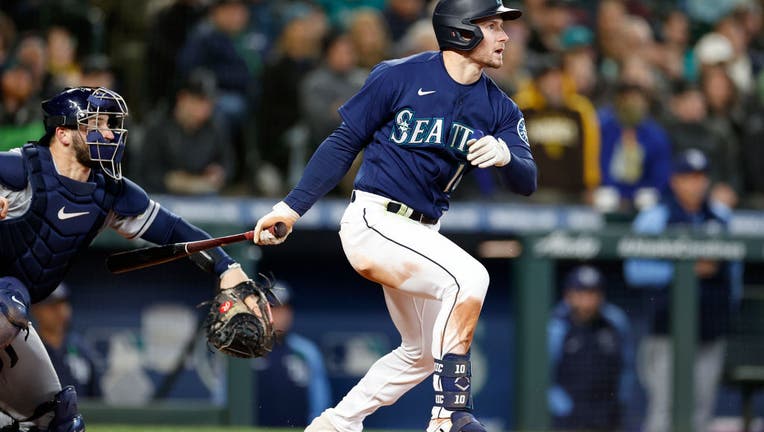 SEATTLE, WASHINGTON - MAY 07: Jarred Kelenic #10 of the Seattle Mariners at bat against the Tampa Bay Rays at T-Mobile Park on May 07, 2022 in Seattle, Washington. (Photo by Steph Chambers/Getty Images)

The Seattle Mariners have demoted outfielder Jarred Kelenic to Triple-A Tacoma and promoted Steven Souza Jr. as part of eight roster moves ahead of this weekend's series with the New York Mets.

A year to day from when Kelenic was first promoted to the Major Leagues – and ahead of the series with the Mets, who traded Kelenic to Seattle as part of the Robinson Cano-Edwin Diaz trade in 2018 – he was sent back to the minors after a poor start to the 2022 campaign.

Infielder Mike Ford reported to the roster after being re-acquired in a trade with the San Francisco 49ers on Thursday, and left-handed pitcher Danny Young and outfielder Stuart Fairchild were optioned to Triple-A Tacoma.

Fairchild and right-handed pitcher Yohan Ramirez were designated for assignment.

Kelenic, 22, was hitting just .140 in 30 games played for the Mariners this season. He hit three home runs with two doubles, a triple and 10 RBI with nine walks and 36 strikeouts.

Kelenic is striking out at a rate of 37.5 percent. It's the highest strikeout rate in the Major Leagues among players to have appeared in at least 30 games. It's sixth-worst among players with at least 80 plate appearances.

Kelenic was a pinch-hitter in the ninth inning of Wednesday's 4-2 loss to the Philadelphia Phillies. He struck out on four pitches without making a swing in the at-bat, which included two fastballs from Corey Knebel in the middle of the zone.

"We were headed in a pretty good direction," manager Scott Servais said Wednesday. "Frustrated with his at-bat today. No question about that."

Souza, 33, is an Everett, Wash. native that played at Cascade High School. He signed with Seattle to a minor league contract in March. He's batting .267 with five home runs, five doubles, 17 RBI, 17 runs scored and three stolen bases with 19 walks in 22 games for the Rainiers. Souza is a seven-year MLB veteran that has played for the Washington Nationals, Tampa Bay Rays, Arizona Diamondbacks, Cubs and Los Angeles Dodgers.

Romo, 39, was placed on the injured list on April 13 due to right shoulder inflammation. He's thrown two scoreless innings with three strikeouts for the Mariners this season.

Sampson, 30, made his debut with the Mariners in 2016 but was injured during warmups prior to his second start with the team. Sampson is a Redmond, Wash. native that played at Skyline High School and Bellevue Community College. He will report to Triple-A Tacoma.

Fairchild, 26, has appeared in three games with Seattle this season after being recalled from Triple-A Tacoma on April 30. He was acquired in a trade from Arizona in exchange for cash considerations on April 23.

Young, 27, made his debut with the Mariners on Monday against the Phillies. He threw 2 ⅓ innings and allowed one run on three hits with a walk and three strikeouts.