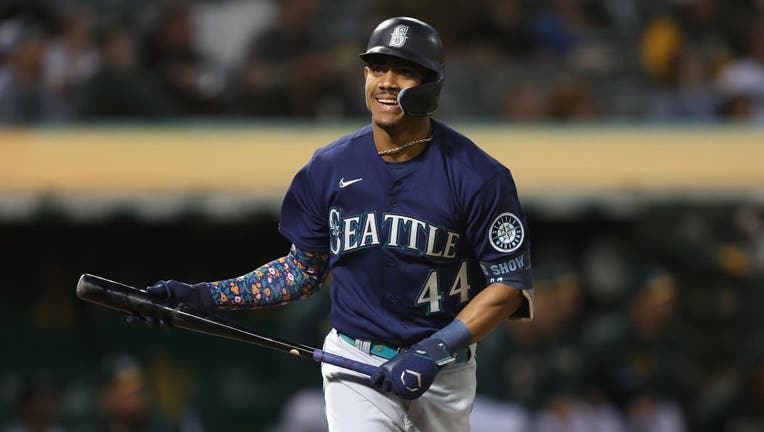 Seattle Mariners outfielder Julio Rodríguez was named the Jackie Robinson Award winner as the American League Rookie of the Year by the Baseball Writers' Association of America.

Rodríguez had a stellar debut campaign in Seattle, helping to carry the Mariners to their first postseason appearance in 21 years.

"There's one chance, that's it. To be able to win that rookie of the year award is pretty cool. You've just got one chance to do it in your career and being able to achieve that is a good feeling," Rodríguez said.

Rodríguez received 29 of the 30 first-place votes for the award. Rodríguez beat out Baltimore Orioles catcher Adley Rutschman and Cleveland Guardians outfielder Steven Kwan for the honor. Rutschman received the one first-place vote that didn't go to Rodríguez as he finished second in the voting over Kwan.

Rodríguez was the only rookie to be named to the AL All-Star team this season. He became the third Mariners player age 21-or-younger to be named an All-Star, joining Ken Griffey Jr. (2x) and Alex Rodríguez (2x). He also participated in the MLB Home Run Derby at Dodger Stadium, hitting the most home runs (81) and finishing in second place to Juan Soto.

Rodríguez led all rookies with 28 home runs, ranked second in runs scored (84), RBI (75), extra-base hits (56) and stolen bases (25), and was third in hits (145). He became the first player with 25-plus home runs and 25-plus stolen bases in a debut season in Major League history, as well as the fastest (125 career games) to reach those feats, surpassing Mike Trout of the Los Angeles Angels (128 games).

"I feel like all the learning experiences I had. All the doubts that I had throughout the year, I feel like that's whenever I learned the most, on the down parts," Rodríguez said. "That rough start at the beginning, whenever I maybe was not doing so good, so I feel like all those things that happened the first year, that kind of opened my eyes so I'm gonna take all that and I know it's gonna serve me well along my career."

Davis was the person that announced Rodríguez as the winner during MLB Network's award show on Monday.

"That was amazing. That was amazing," Rodríguez said. "As soon as I saw A.D., I was like, 'oh my, we might be winning something.' But it was amazing because everybody knows how good of a guy he is and just having him, one of the Mariners' greats, delivering that message was really special."

In addition to the Jackie Robinson Award, Rodríguez has also been named the Baseball America Major League Rookie of the Year, The Sporting News American League Rookie of the Year and the Players Choice Awards American League Outstanding Rookie of 2022. He was also named a Silver Slugger Award winner along with Trout and Aaron Judge of the New York Yankees. Rodríguez is just the second Mariners player to win a Silver Slugger as a rookie, joining Ichiro Suzuki in 2001.

Rodríguez sustained a small fracture in his finger sliding into second base during the team's Game 3 loss to the Houston Astros in the AL Division Series. Rodríguez said the finger is healing well and that he's resumed baseball activity in the last few days. He added that he would have been able to keep playing if the Mariners had extended their playoff run.

But Rodríguez said his attention will now fully turn toward what is ahead for next season.

"That was the 2022 award," Rodríguez said. "I feel like that's a year that is just closed, it's over. So we got 2023 now, so I feel like we just got to keep on going. Keep on going and I fill out those numbers, whatever I did in 2022, we're just going to stay in 2022. And now we got to get ready for next season, improve this offseason and just get ready for the challenge again."