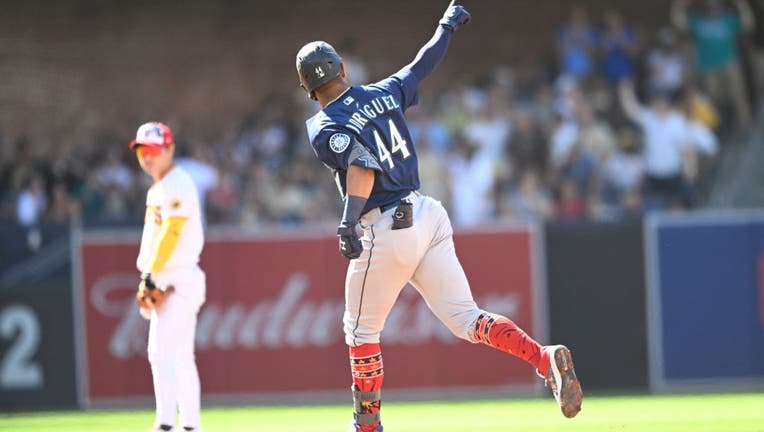 SAN DIEGO, CA - JULY 4: Julio Rodriguez #44 of the Seattle Mariners points into the stands after hitting a two-run home run during the fourth inning of a baseball game against the San Diego Padres July 4, 2022 at Petco Park in San Diego, California.

It's the third honor already this season for Rodríguez as he was named AL Rookie of the Month for both May and June.

After a slow first month of the season, the 21-year old Rodríguez has been one of the best hitters in the American League.

Since May 1, Rodríguez is batting .297 with 12 doubles, two triples, 15 home runs, 37 RBI, and 38 runs scored. His on-base-plus-slugging percentage of .912 ranks eighth among all hitters in the AL since May 1. He's tied for third in hits (69), tied for sixth in home runs, tied for seventh in triples, stolen bases (11) and RBI, and tied for eighth in runs scored.

After bottoming out at 29-39 after losing four of five games to the Los Angeles Angels at home on June 19, the Mariners have won 11 of their last 14 games to claw their way back into the fringes of the playoff hunt. Rodríguez's surge has been critical to that surge with J.P. Crawford and Jesse Winker serving suspensions and Ty France sidelined due to an elbow injury.