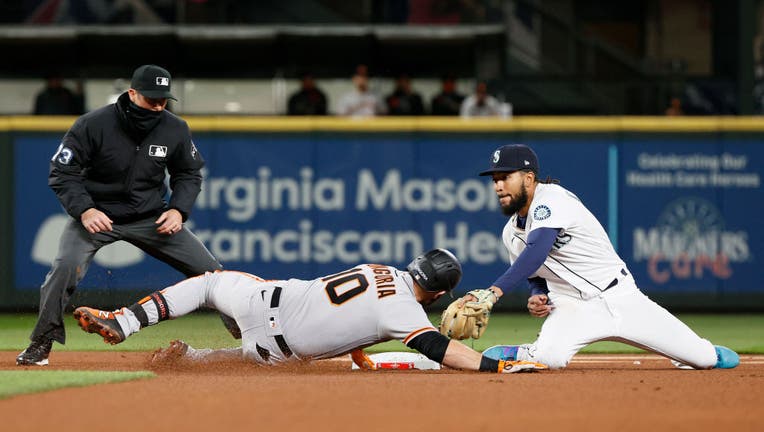 SEATTLE, WASHINGTON - APRIL 01: J.P. Crawford #3 of the Seattle Mariners tags out Evan Longoria #10 of the San Francisco Giants at second base in the fourth inning on Opening Day at T-Mobile Park on April 01, 2021 in Seattle, Washington. (Photo by St

SEATTLE - The Seattle Mariners take home an 8-7 victory on their Opening Night against the San Francisco Giants Thursday night.

Jake Fraley walked with the bases loaded in the 10th inning to score Evan White with the winning run, and the Seattle Mariners rallied from a five-run deficit to beat the San Francisco Giants 8-7.

The Mariners welcomed back fans on Thursday after nearly two years since fans stepped foot inside T-Mobile Park due to the coronavirus pandemic.

A wild opening night concluded with a massive comeback by the Mariners, who scored six runs in the eighth inning to take a 7-6 lead, lost it on pinch-hitter Alex Dickerson’s solo homer in the ninth and finally won in extra innings.

San Francisco’s bullpen struggled all night, capped by Jose Alvarez’s inability to throw strikes in the 10th. Alvarez walked Taylor Trammell and Dylan Moore to begin the inning, loading the bases after White started on second base.

Alvarez (0-1) wasn’t close against Fraley, and Seattle celebrated an unlikely victory when the reliever’s 3-1 pitch was wide.

Anthony Misiewicz (1-0) pitched the top of the 10th to get the victory, and escaped the inning unscathed after Mitch Haniger made a terrific sliding catch on Buster Posey’s fly ball down the righ- field line to end the inning with Evan Longoria at third base.

Seattle scored six times in the eighth against San Francisco’s shaky bullpen to take a 7-6 lead. Moore had a key two-run double on the first pitch from Tyler Rogers, and Seattle took the lead on first baseman Brandon Belt’s throwing error that allowed two runs to score.

The lead was short-lived. Dickerson led off the ninth pinch-hitting for Austin Slater, who homered earlier in the game. Dickerson fell behind 0-2, but Seattle closer Rafael Montero left a changeup in the middle of the plate and Dickerson lined it out to right-center for San Francisco’s fourth solo home run.

Nearly 2 years later and the Mariners welcomed back fans to T-Mobile Park after the coronavirus pandemic halted live sporting events.

Longoria and Posey both homered in the second off Seattle starter Marco Gonzales, who tied a career high with three home runs allowed.

The late chaos ruined a terrific outing from San Francisco starter Kevin Gausman. Starting on opening day for the second time in his career, Gausman allowed only one run while pitching into the seventh. He retired the first 11 batters before Kyle Seager’s two-out double in the fourth. Gausman issued a pair of walks, but the only other hit allowed was White’s leadoff double in the seventh.

It had been 550 days since fans were last at T-Mobile Park for a Mariners home game, and while the sellout crowd of 8,174 arrived with energy and excitement there proved to be little to cheer from the home side until the huge eighth-inning rally.

BACK AT THE PARK

The Mariners’ opener was the first professional sporting event in Washington state to allow fans since March 7, 2000, when the Seattle Sounders hosted the Columbus Crew in an MLS match. A small number of family and friends had been allowed to attend college basketball games in the state in late winter.

Seattle has sold out the entire opening series against San Francisco.

Posey, Belt and San Francisco shortstop Brandon Crawford all made their 10th career opening day starts. For Crawford it was his 10th consecutive start at shortstop to begin the season, while Posey returned after opting out last year.