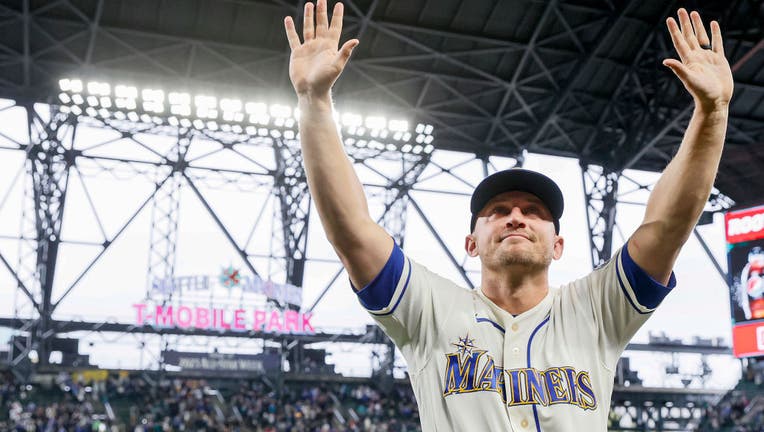 SEATTLE, WASHINGTON - OCTOBER 03: Kyle Seager #15 of the Seattle Mariners waves to fans after his team's loss to the Los Angeles Angels 7-3 to end their season at T-Mobile Park on October 03, 2021 in Seattle, Washington. (Photo by Steph Chambers/Gett

SEATTLE - During Kyle Seager’s decade as the starting third baseman in Seattle, his overwhelming desire was finding a way to end the Mariners’ long postseason drought.

In a season when expectations were low, Seager and the Mariners nearly pulled off some late magic — only to fall short on the final weekend.

"I was genuinely hoping that the other two games, we get a couple of losses for us and then we go ahead and win, so that was the ultimate goal," Seager said.

The Mariners’ quest to halt their 20-year playoff drought finally fizzled Sunday as they lost to the Los Angeles Angels 7-3 on the last day of the regular season.

RELATED: Seattle Mariners fans 'Believe' in clinching a spot in the playoffs since 2001 season

Seattle’s late surge into contention was stopped by Los Angeles, which took two of three in the series. The surprising Mariners needed a win plus a loss by either Boston or New York to force at least a tiebreaker game for one of the two wild cards in the American League.

But both the Yankees and Red Sox scored in the ninth inning to win and clinch postseason spots, rendering Seattle’s result meaningless.

"It wasn’t a team where we were just more talented than the other team every single day, but you had a group that just collectively played together and they collectively tried to win every single night," Seager said.

It was also likely the farewell for Seager, who broke in with the Mariners in 2011. Once the Boston and New York victories went final, the closing moments of Game 162 became an emotional sendoff for the former All-Star.

Seager was lifted with one out in the ninth to thunderous applause and hugs from teammates. The tears started well before manager Scott Servais stepped on the field to allow Seager his moment of recognition.

"We might not ever remember the score of today’s game, but you’ll certainly remember some of the moments and certainly (Seager) walking off the field there," Servais said.

Tickets sold out on Friday for the Seattle Mariners game against the Los Angeles Angles. Fans showed up early to T-Mobile Park for the big match up-- winning the weekend series would clinch a spot in the playoffs for the Mariners.

Shohei Ohtani led off the game with his 46th home run for the Angels and Jared Walsh added a two-run shot in the fourth that left the more than 44,000 in attendance sitting in nervous silence for most of the day.

The Angels finished the season 77-85 and in fourth place in the AL West for the fourth straight season.

"It’s a good way to wrap it up for the year, other than being able to participate a little bit longer," manager Joe Maddon said.

Seattle’s 20-year absence from the postseason is the longest in any of the four major pro sports in North America. The Mariners had won 10 of 11 coming into the final series against the Angels, and combined with stumbles by the Yankees and Red Sox, provided hope going into the final three days of at the very least extending the season to a 163rd game.

Seattle dropped the opener to the Angels 2-1 and rallied for a 6-4 win on Saturday night to keep its hopes alive to the final day.

But the finale is as far as the Mariners got, although there is optimism the young core that arrived can carry Seattle into regular contention in the future. The Mariners finished 90-72, their best record since winning 93 games in 2003.

"Baseball’s back in Seattle," Servais said. "We didn’t get across the finish line, but I think everybody sees where we’re headed, and I’m really excited to see that many people jump on the bandwagon with us because it’s going to be a fun ride."

Seattle starter Tyler Anderson (7-11) wasn’t good from the outset, making his third start in eight days. Anderson was battered for nine runs in two innings barely a week earlier by the Angels. He made a spot start last Tuesday against Oakland, allowing one run in four innings.

But the crispness he showed against the A’s was absent again. Ohtani homered on the third pitch of the game. Two walks, two hits — including an RBI double from David Fletcher — and a sacrifice fly ended Anderson’s day after just five outs.

Left-hander Anthony Misiewicz gave up a two-out hit to Phil Gosselin and Walsh’s 29th homer of the season in the fourth to give the Angels a 6-2 lead.

While pitching was a problem, Seattle missed chances at the plate. The Mariners left runners in scoring position in the first, third and most damaging the fourth inning when Seattle had runners at second and third and one out and failed to score. J.P. Crawford struck out and Ty France fouled out.

Seattle also loaded the bases with one out in the sixth inning, but managed just one run.

Along with the celebration in the ninth inning that carried into postgame, Seager’s son Crue threw out the first pitch to his dad. The chants from the ninth inning carried well after the final out as Seager stayed on the field for pictures with teammates and staff.

"If this is his last game here they’re saying goodbye and thank you for everything that he’s done," Seattle rookie Jarred Kelenic said. "And that’s hard because he’s an amazing guy and even a better teammate."

Ohtani finished with 100 RBIs and one home run shy of matching Troy Glaus’ franchise record of 47 in 2000.

"Just a fabulous, fabulous year and there is only one person who could replicate it and it’s him," Maddon said.

Angels: Los Angeles will open the 2022 season on March 31 at Oakland.

Mariners: Seattle opens the 2022 season at home on March 31 vs. Detroit.