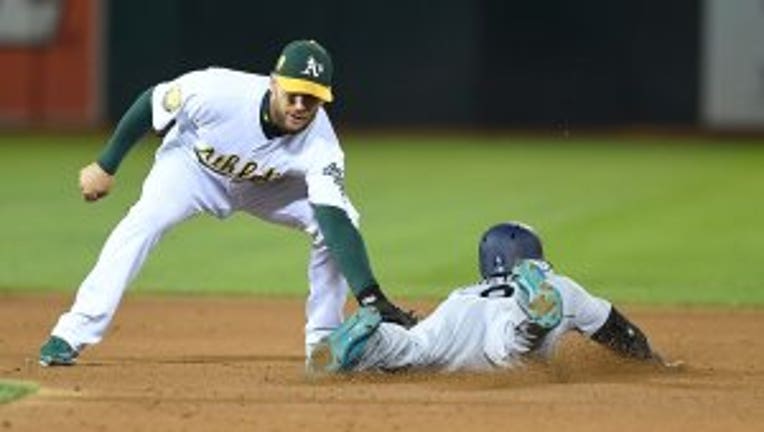 Mariners second baseman Dee Gordon is tagged out by Jed Lowrie after being caught stealing in the top of the eighth inning at Oakland Alameda Coliseum on August 14, 2018 in Oakland. (Photo by Thearon . Henderson/Getty Images)

SEATTLE - If the Seattle Mariners have excelled at anything over the past 17 seasons, it may be proving that good is often not quite good enough in Major League Baseball.

To that end, 2018 could be their crowning achievement.

“It’s a weird year,” Seattle Times Mariners reporter Ryan Divish said Thursday. “Any other year, the Mariners would be set to win the wild card, but it’s just gotten difficult for them.”

Sure, the Mariners have had their share of losing seasons since they last made the playoffs in 2001. But you don’t put together the longest postseason drought in all four major professional sports leagues without a little luck.

This year’s roadblock appears to be the Oakland A’s. Seattle sits 2½ games behind them for the final wild card spot despite being 18-games above .500 and on pace to win 92 games.

Pretty good, just not good enough. Much like the series the Mariners just lost to their division rival.

“Those games they lost in Oakland, the A’s just made more plays,” Divish said. “The Mariners didn’t play too terribly, the A’s just played better than they did and that’s pretty much what’s been happening since about the middle of June.”

He’s got a point there.

Most analysts said all the Mariners had to do was play .500 the rest of the way to get into the playoffs.

That’s about what they’ve done, too, but the math looks a lot different today.

“Some people have complained that the Mariners have given this away,” Divish said. “No, the A’s went out and took it.”

Over those past two months, the Mariners have won 25 games and lost 27. Yet Oakland has gone 38-13, tying the Red Sox for the best record in baseball during that stretch with a .745 winning percentage.

Speaking of Boston, they’re part of the Mariners’ problem, too. Seattle would have the second-best record in the National League, but they find themselves on the outside looking in on the AL race behind the Red Sox, Yankees, Astros and A’s.

True to the blue, indeed.

With 40 games left on the schedule, the postseason is still very much in the Mariners’ grasp. But they’re going to have to do a lot more than play .500 at this point.

“The Mariners need to play .660 baseball,” Divish said. “Unless the A’s were to fall off a cliff or take a step back.”

An Oakland stumble would certainly help Seattle, but what are the odds of that?

“I think a lot of people are waiting for that,” Divish said. “Even though they’ve shown no signs of it.”

Perhaps some good news for the Mariners is that they do play Oakland seven more times this season, giving them a chance to wrestle the wild card lead away on the field.

The odds on that, of course, aren’t where they used to be.

Fangraphs now says the Mariners have a 32 percent chance of making the postseason. Oakland’s odds are up to 69 percent.

Divish sees those numbers meeting in the middle by the end of the year.

It would be a fitting way for the Mariners to finally end their nearly two-decades of near-misses. Then again, a loss in a one-game, regular-season playoff would also add to the Mariners’ tough-luck lore.