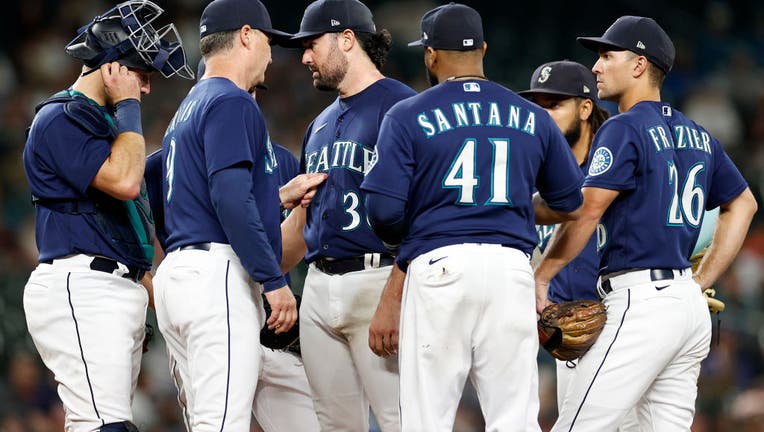 SEATTLE, WASHINGTON - SEPTEMBER 27: Manager Scott Servais #9 talks with Robbie Ray #38 of the Seattle Mariners during the sixth inning against the Texas Rangers at T-Mobile Park on September 27, 2022 in Seattle, Washington. (Photo by Steph Chambers/G

SEATTLE - Robbie Ray has an idea for how to get the Seattle Mariners refocused and hopefully out of their late-season slide.

Stop worrying about what is happening elsewhere.

"For me, we’ve just got to stop looking at the scoreboard. If it was my choice, we turn that thing off. Because we need to play our brand of baseball, we need to go out every day and try to win that day," Ray said after the Mariners lost 5-0 to the Texas Rangers on Tuesday night.

"We need to stop worrying about what other people in the league are doing — what Baltimore is doing, what Tampa is doing, what Toronto is doing," Ray continued. "We need to play Mariners baseball, and I think for me that should be our main focus every day."

Lately, Mariners baseball hasn’t been very good even as the chance at ending the longest playoff drought in the majors inches closer. Seattle lost for the eighth time in 11 games, returning home after an awful road trip. The Mariners went 3-7 and capped the swing by blowing a nine-run lead in a 13-12 loss to Kansas City.

They hoped returning home would ease the frustration, but Seattle’s woes continued. The Mariners were held to one run or less for the seventh time in 13 games.

The only bright spot? Despite the defeat, the Mariners received help thanks to Boston’s victory over Baltimore. The loss by the Orioles kept them 3 1/2 games behind Seattle and reduced its magic number to five for clinching one of the three American League wild cards.

But Seattle failed to take advantage of Toronto’s defeat and lost ground to Tampa Bay as the three teams jockey for positioning entering the final week of the season.

"We’re in a funk right now. It is not timely," Seattle manager Scott Servais said. "Certainly at this time, you want to be playing your best baseball. We are not right now. I do know that it can turn on a dime."

The problem for Seattle on this night was top Texas prospect Josh Jung, who hit two home runs and finished with five RBIs.

Jung hit a solo homer in the second inning off Ray, and his two-out RBI single on a 3-2 pitch in the sixth scored Marcus Semien.

Then came the final blow in the eighth. Jung greeted reliever Diego Castillo with a three-run homer to center field for his first career multi-homer game.

"I think that’s just how it happened tonight, but the team put me in those situations," Jung said. "I just took a good couple swings, hit the ball out of the yard. I got a hanging slider the second time, and the first time I think it was just a 3-2 heater and connected, finally."

Texas used Jesús Tinoco as an opener before Tyson Miller (1-1) took over. The pair allowed two hits in 5 2/3 innings with five strikeouts.

Ray (12-11) went 5 2/3 innings, allowing six hits. He struck out eight and walked two. Most times this season, two earned runs allowed would be enough for a win but not with the current slump for Seattle’s offense.

"We can’t control what other teams do. So we need to just control what we can control," Ray said. "Our game. Our at-bats. Our pitches. Everything in our game."

Rangers: Miller was recalled from Triple-A Round Rock. Right-handed starter Dane Dunning was placed on the 15-day injured list after undergoing arthroscopic hip surgery Monday. Texas also transferred LHP Brett Martin from the bereavement list to the 15-day IL with a shoulder strain.

Mariners: 3B Eugenio Suárez was activated off the 10-day injured list after breaking his right index finger on the road trip. OF Taylor Trammell was optioned to Triple-A Tacoma. Suárez was the designated hitter in his return and took grounders during pregame infield to see how the finger responded to throwing and fielding. Suárez struck out three times and walked once. ... OF Julio Rodríguez (back strain) could start baseball activity toward the end of the week with the goal of coming off the injured list next Monday when he becomes eligible.

Rangers: LHP Martín Pérez (12-6, 2.90 ERA) makes his 31st start and has won his past two decisions. Pérez had a no-decision in his last outing, allowing three runs over six inning against the Angels.

Mariners: RHP George Kirby (7-4, 3.30) looks to rebound from his worst start of the season when he lasted just 2 1/3 innings and allowed five earned runs against Oakland. Kirby walked three against the A’s after walking three batters in his previous six starts combined.