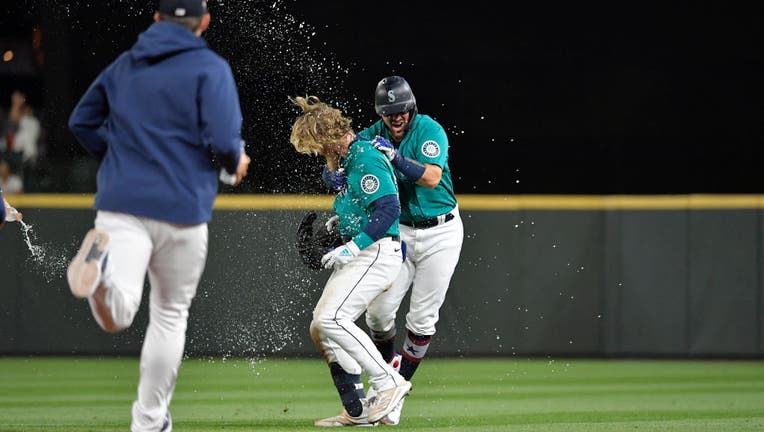 SEATTLE, WASHINGTON - JULY 02: Jake Fraley #28 of the Seattle Mariners celebrates with his teammates after hitting a single to win the game in the 10th inning against the Texas Rangers at T-Mobile Park on July 02, 2021 in Seattle, Washington. The Mar

SEATTLE - Jake Fraley was showered on opening night three months ago when he walked with the bases loaded for the first of the Seattle Mariners’ extra-inning victories.

On the night the club dubbed "re-opening night," Fraley was once again the recipient of a game-winning celebration after yet another extra-inning win for the surging Mariners.

Fraley’s single with one out in the 10th inning scored Jake Bauers with the winning run, and Seattle improved to 10-1 in extra innings this season with a 5-4 victory over the Texas Rangers on Friday.

Nearly 4 1/2 hours after the first pitch, Fraley chopped a grounder off Texas reliever Taylor Hearn (2-3) into right field and set off another wild celebration for the Mariners on the night T-Mobile Park was at full capacity for the first time since 2019.

Seattle won for the ninth time in 12 games, improved to 19-7 in one-run games and has won 13 straight overall at home against the Rangers.

"To be able to put on a game like that for all the fans of Seattle for this being the first day, it was huge," said Fraley, who also homered.

Anthony Misiewicz (3-3) worked a perfect 10th to earn the victory, including a strikeout of Nate Lowe on the 12th pitch of the at-bat.

But it never should have reached extras if not for sloppy defense. Seattle’s third error of the night proved costly as third baseman Ty France’s errant throw with one out in the ninth allowed Eli White to reach second base. White scored on Jonah Heim’s RBI double to deep center field to tie the game at 4 minutes after it seemed Seattle was on the verge of another comeback victory.

"It wasn’t our cleanest game, but we had a chance at the end and our guys executed and got it done," Seattle manager Scott Servais said.

The Mariners scored twice in the eighth on Luis Torrens’ solo home run and J.P. Crawford’s two-out single that scored Fraley from second base. It was the third hit of the night for Crawford and gave Seattle a 4-3 lead. Torrens’ homer was his sixth in his past 12 games.

Hector Santiago pitched in relief for Seattle in his first appearance since becoming the first player disciplined under Major League Baseball’s crackdown on grip-enhancing foreign substances when he was given a 10-game suspension. The penalty is being delayed until an appeal is decided.

Santiago struck out the side in the eighth inning sandwiched around a single by Lowe. Before the inning started, Santiago removed the rosin bag from the mound. Santiago said whatever was found on his glove last Saturday vs. the Chicago White Sox and led to his suspension was only rosin.

Santiago was checked and cleared by plate umpire John Tumpane after the inning finished.

Both teams had defensive issues that led to runs. Seattle’s Mitch Haniger dropped a short pop fly in third inning that helped lead to two runs for the Rangers on Brock Holt’s two-run single.

Texas had a pair of throwing errors from Brett Martin and Charlie Culberson in the seventh inning that led to a run for Seattle.

"They just were silly, silly mistakes," Texas manager Chris Woodward said. "Didn’t execute some plays, easy outs to first base, some throw downs. We’ve got to play better and sometimes games like that happen on both sides."

Texas starter Kyle Gibson lowered his AL-best ERA to 1.98, allowing one run in 5 2/3 innings. Gibson is one of four pitchers in baseball with an ERA under 2.00. He struck out seven and walked three. The only damage against him was Fraley’s solo homer.

In accordance with Washington state lifting most of its COVID-19 restrictions earlier this week, the Mariners were able to offer full capacity at T-Mobile Park for the first time since the end of the 2019 season. The announced crowd was 28,638.

Mariners: Servais said injured 1B Evan White is still having pain in his right hip even after getting a cortisone shot recently. Servais said White is not close to picking up his baseball activity after having a setback during a rehab assignment. ... RHP Justin Dunn (shoulder inflammation) is expected to begin a throwing program in the next few days. Dunn has been out since June 18.

Rangers: RHP Jordan Lyles (3-5, 5.12 ERA) makes his 16th start of the season. Lyles has dropped his ERA by nearly two runs over his past eight starts. He allowed one run over seven innings in his last start.

Mariners: LHP Marco Gonzales (1-4, 5.10) starts for the first time since June 20 after going on the paternity list prior to his last start for the birth of his daughter. Gonzales pitched 6 1/3 innings and allowed two runs in his last start June 20 vs. Tampa Bay.